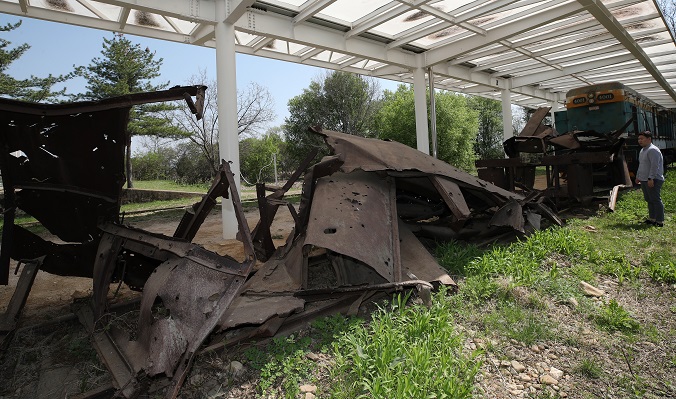 This file photo shows a rusty train at Woljeong-ri Station, which was destroyed during the Korean War, in the northeastern border town of Cheorwon. (Yonhap)

SEOUL, March 24 (Korea Bizwire) — A peace-themed tour program for the central section of the Demilitarized Zone (DMZ) separating the two Koreas will be resumed this week, about one and a half years after its suspension caused by the outbreak of African swine fever (ASF), officials said Wednesday.

The county office in Cheorwon, a Gangwon Province border town about 90 kilometers northeast of Seoul, said its DMZ Peace Tour program featuring visits to a border observatory and several Korean War remains will be restarted on Thursday.

Cheorwon’s DMZ Tour program, which includes stops at the Cheorwon Peace Observatory, the Second Infiltration Tunnel, train stations destroyed during the war and DMZ Ecological Peace Park, was halted in September 2019 due to the ASF outbreak in the region.

As part of efforts to stem the spread of COVID-19, the border tour program will be offered twice a day beginning at 10 a.m. and 2 p.m., and the number of participants will be restricted to fewer than 100 every day, county officials said.

All participants will have to undergo fever checks and abide by all necessary quarantine rules, they said, noting group tours won’t be allowed until the coronavirus situation stabilizes.

Cheorwon county considered reopening the DMZ tour program last December but shelved the plan due to fears of COVID-19 transmissions.

In a related move, the Gyeonggi Province border city of Paju has recently resumed its own DMZ Tour program in parts of the western section of the DMZ.

According to Paju officials, a public tour program for the Third Infiltration Tunnel and the Dora Observatory was restarted last week for the first time since its suspension in October 2019 also due to the ASF outbreak.