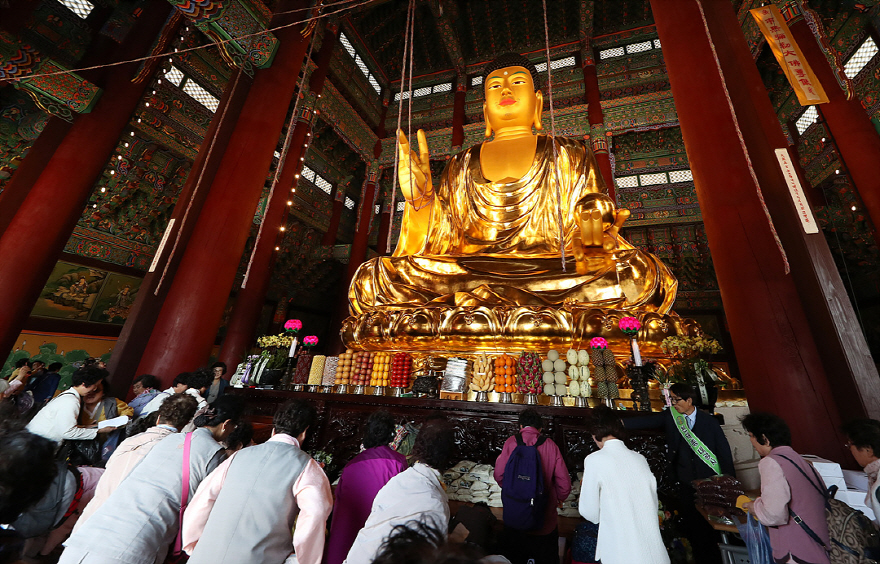 Maitreya Buddha, known as “Mireukbul” in Korean, is regarded as a future Buddha that is yet to appear in this age. (image: Yonhap)

SEOUL, Apr. 11 (Korea Bizwire) — A South Korean Buddhist temple on Monday dedicated a new hall containing a bronze statue of “Maitreya” Buddha that it claims is the largest single wooden building in the Orient, after 14 years of construction.

Daegwang Temple, located in Seongnam just south of Seoul, held a ceremony earlier in the day to celebrate the dedication of Mireukbogeon Hall at the temple affiliated with the Cheontae Order of Korean Buddhism.

With a gross floor area of 661 square meters and a height of 33 meters, the hall is one large interior structure without separate floors. Carpenter Shin Eung-soo, the No. 64 important intangible cultural property of South Korea, took charge of the project as the master builder.

About 200 truckloads of logs were used in the construction of the hall, with logs for its ridge beams taken from Canadian-grown red pines aged 453 years.

At the center of the hall is the 17-meter seated bronze state of Maitreya Buddha made of 88 tons of bronze, gilded with 150,000 11-centimeter-square gold leaves and painted with 1.6 kilograms of gold dust.

Maitreya Buddha, known as “Mireukbul” in Korean, is regarded as a future Buddha that is yet to appear in this age.

During the ceremony, Ven. Woldo, the temple’s chief monk, said, “The statue of the Buddha will become a symbol to enhance the prosperity of the country and bring about a peaceful reunification of the Korean Peninsula to contribute to world peace.”

The ceremony brought together about 10,000 people including Ven. Doyong, supreme patriarch of the Buddhist order, and Acting Culture Minister Song Soo-keun.