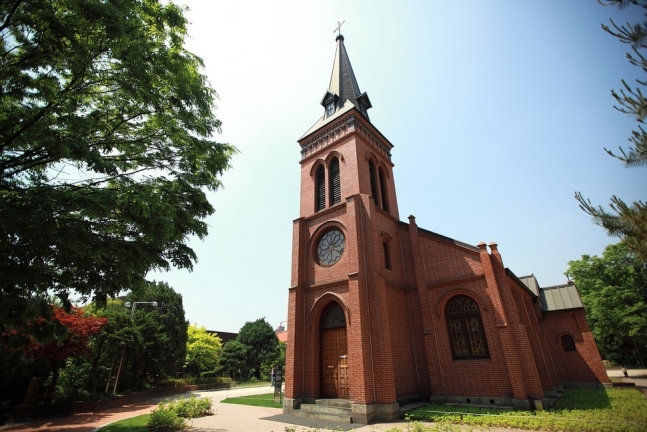 An unidentified member of the misandrist online community Womad posted a photo of a Catholic sacramental wafer scribbled with foul language in red ink and burned beyond recognition on Tuesday. A message that followed the photo denounced Jesus and the Roman Catholic for oppressing women.

“Bog off, all the religions that oppress women,” the message read, lashing out at the religious narrative that women, represented by Eve, were created from one of Adam’s ribs.

The Catholic Bishops’ Conference of Korea (CBCK) earlier denounced the posting as a serious insult to the Catholic Church and vowed to take action in response.

“In accordance with (Catholic) regulations, the CBCK is preparing the process to notify the Vatican through the Vatican ambassador (in Seoul),” priest Ahn Bong-hwan, spokesman of the CBCK, said. “(We) are reviewing a plan to make the notification hastily given the gravity of the situation.”

He said the writer may not be subject to punishment according to the laws of the Church or even the secular legal system. “But we will make far-reaching efforts to find measures to prevent a recurrence of this kind of issue.”

The priest also told a local radio show in the morning that “A grave issue like this should immediately be notified to the Vatican’s Congregation for the Doctrine of the Faith while actions need to be taken to protect the spiritual heritage and rights of the Church.”

Tens of thousands of women staged a protest last Saturday in central Seoul, calling for an end to the judiciary’s “gender-biased” investigation into a woman accused of secretly filming a male nude model.

The accused is currently standing trial at a Seoul court after posting a photo of the male nude model, with naked body parts visible, on Womad on May 1.

The 25-year-old woman was later made to stand in front of the media as she underwent what the female protesters said was an unusually prompt investigation, prompting them to take to the street to protest that she has not been treated equally as a massive number of men accused of filming and publishing spycam images of women.