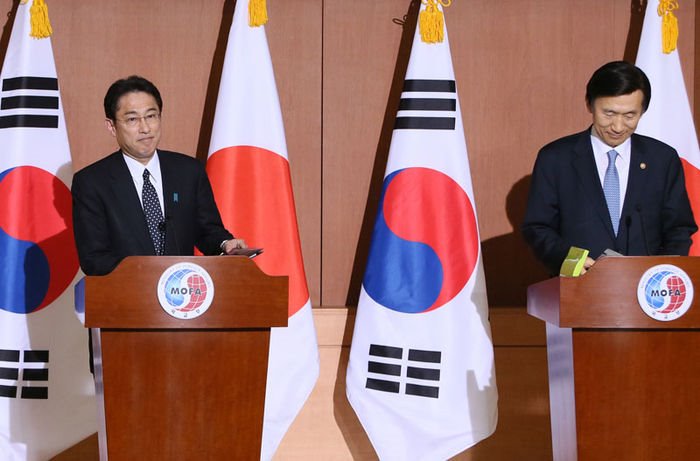 The Moon Jae-in administration’s move represents an effective nullification of a controversial accord in 2015 signed by the government of then President Park Geun-hye, who was later impeached.

At that time, the foreign ministers of the neighboring countries — Yun Byung-se and Fumio Kishida — agreed to resolve the so-called comfort women issue “finally and irreversibly” for forward-looking bilateral ties.

It’s an open secret that South Korea was under heavy pressure from the United States to elevate trilateral security cooperation involving Japan to a new level in order to counter North Korea’s military threats.

The creation of the Reconciliation and Healing Foundation the next year was a key element of the accord, which has been unpopular here.

It was meant to provide surviving Korean victims and bereaved families of deceased ones with financial support.

However, the victims refused to accept disbursements, condemning the government for its “unilateral” agreement. Many other South Koreans have also disapproved of it.

They say it would enable Japan to effectively evade its legal responsibilities for the wartime atrocity. Japan’s military forced an unconfirmed number of Korean women into sexual slavery during World War II. Some historians put the number at as many as 200,000.

The characteristics of the foundation is contentious.

Japan offered 1 billion yen (US$8.9 million) for the nonprofit organization as “consolatory” money, not compensatory.

The Japanese government has argued that there’s no evidence of the involvement by the military and other authorities in any official documents.

Japan reiterated its position during a recent U.N. panel session.

In an ensuing report, the U.N. Committee on Enforced Disappearances said it is “concerned about the lack of adequate reparations to the victims.”

It expressed regret over Japan’s claim that the comfort women issue has been settled completely.

Seoul’s decision to terminate the operation of the foundation was widely expected, while Japan urged it to abide by the 2015 agreement despite the change of government.

Moon and his aides have regarded it as a wrong deal that should not have been born.

They point out addressing the problem is conducive to the wholesome and stable development of bilateral ties over the long term, even as worries are widespread that the diplomatic stand-off will weigh heavily on trade and cultural exchanges. 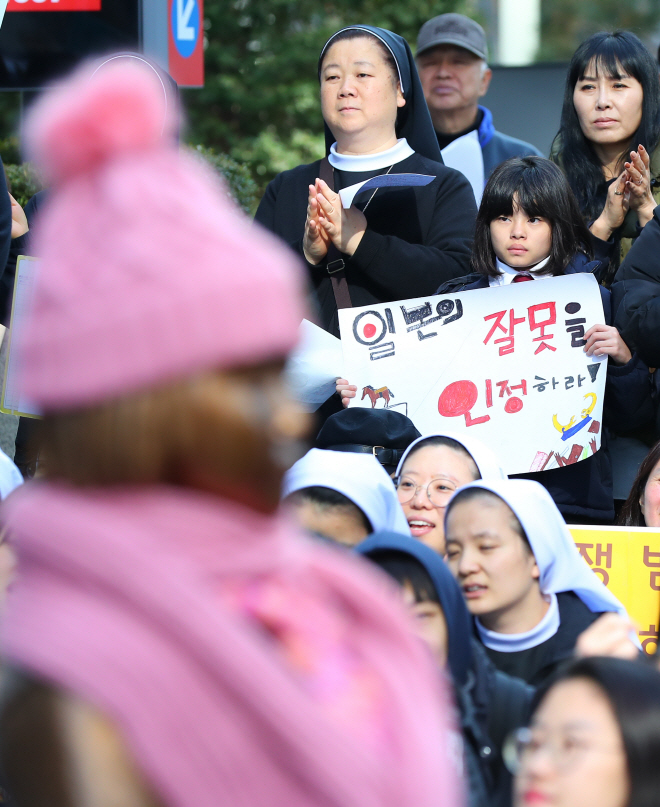 South Koreans stage a weekly rally in Seoul against Japan’s wartime sexual slavery in front of a “girl statue for peace,” which symbolizes victims. (Yonhap)

For Japan, a concern is that it may be marginalized in the denuclearization and peace process on the Korean Peninsula.

The two sides have already struggled to manage a spat over another thorny history issue — wartime forced labor.

A month ago, South Korea’s Supreme Court ruled in favor of four Koreans forced to work for a Japanese steelmaker.

It rejected Japan’s assertion that all reparation issues, connected with its colonization of Korea from 1910-45, have been settled in a 1965 treaty to normalize diplomatic ties.

The court, however, authorized the individual rights to compensation.

The South Korean government said it respects the independent ruling and would draw up a new strategy on the matter in relations with Japan.

Osamu Ota, a professor at Doshisha University in Kyoto, pointed out the realistic limit of several past apologies by Japan and its agreements with South Korea on shared history.

“Japan should first find facts on those history issues and then take appropriate measures, whether apologies or reparations,” he said.

He cited the 1998 joint declaration by then leaders President Kim Dae-jung and Prime Minister Keizo Obuchi as an example.

It’s a tall order to resolve decadeslong history disputes without Japan’s formal findings and acknowledgement of what happened during its colonial rule, according to the Japanese expert on Seoul-Tokyo ties.

Chin Chang-soo, a senior researcher at South Korea’s Sejong Institute, said it’s important for Seoul to send constant messages that it wants future-oriented relations with Tokyo in a genuine sense.

“It needs to consider the foreign minister’s visit to Japan or the dispatch of a special envoy as well,” he said.