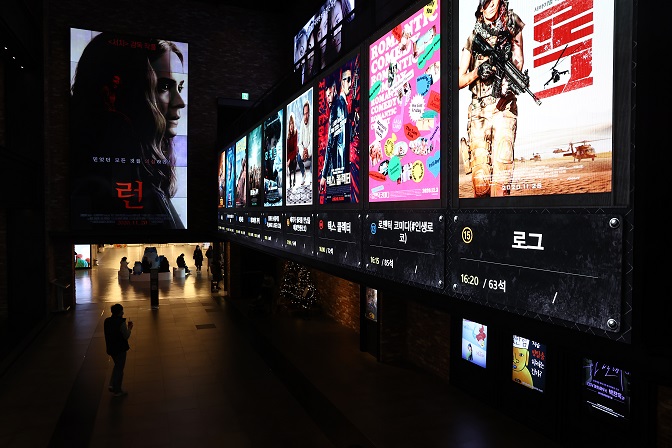 A Seoul theater is quiet on Dec. 7, 2020, as the greater Seoul area has been put under Level 2.5 social distancing rule, the second-highest under the five-tier system, which prohibits operation of cinemas after 9 p.m. (Yonhap)

SEOUL, Dec. 9 (Korea Bizwire) — No longer basking in the glow of a flourishing film industry, South Korea is expected to log the lowest number of moviegoers in over a decade this year due to the impact of the new coronavirus pandemic.

As of Wednesday, the total number of moviegoers for this year was tallied at 58.4 million, a mere 25.8 percent of that of 2019, according to data from the Korean Film Council (KOFIC).

In 2019, the South Korean cinemas saw a record of 226 million moviegoers on the back of four mega hit movies that each attracted over ten million viewers, including the Oscar-winning “Parasite” and local cop comedy “Extreme Job.”

This year, however, the number of moviegoers is expected to drop to the lowest since KOFIC began to record yearly attendance in 2004, and approach that of 1999-2000 when the economy hit rock bottom in the aftermath of the 1997-1998 Asian financial crisis.

This year’s trend is also attributable to the Level 2.5 social distancing rule, the second-highest under the five-tier system, imposed in greater Seoul until the end of this year. Theaters must shut by 9 p.m. to contain the spread of COVID-19.

The number of moviegoers fell by half from 16.8 million in January to 7.4 million in February as the first wave of the pandemic hit the country, and it further plunged to 972,572 in April.

The figure rebounded in May to 1.5 million thanks to national holidays, and reached 8.8 million in August as summer blockbusters were released, including Christopher Nolan’s “Tenet” and Korean thriller “Deliver Us From Evil.”

In September, people once again turned their backs on theaters as virus cases spiked after mass anti-government rallies held on Aug. 15, the National Liberation Day.

Some 4.6 million and 3.6 million moviegoers visited the theaters in October and November, respectively, according to KOFIC.