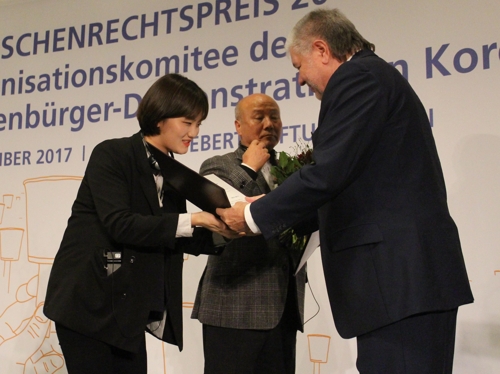 Jang Ae-jin (L), a survivor of the 2014 Sewol ferry sinking, receives the 2017 FES Human Rights Award from Kurt Beck, head of the German political foundation Friedrich-Ebert-Stiftung (FES), during a ceremony in Berlin on Dec. 5, 2017. (image: Yonhap)

Jang Ae-jin, a survivor of the 2014 Sewol ferry sinking that left more than 300 dead or missing and a former student of Danwon High School, south of Seoul, received the 2017 FES Human Rights Award on behalf of the massive crowds during a ceremony in Berlin marking the presentation of the award.

The foundation, established in 1925 and associated with Germany’s Social Democratic Party, has honored outstanding individuals and groups in promoting human rights since 1994.

The Korea Alliance of Progressive Movements, which spearheaded the rallies to urge Park to step down over the scandal implicating her longtime close friend Cho Soon-sil and leading to the ouster of Park, selected Jang as the representative of the citizens through an online vote.

Park, who took office in February 2013 and is now in jail over corruption charges, was impeached and removed from office in March for allowing her friend to interfere in state affairs for private gains.

During the ceremony, FES head Kurt Beck said the foundation gave the citizens the award “in recognition of their participation in peaceful and nonviolent rallies for a long time and their contribution to promoting human rights.”

“I hope our country will become a bona fide country that gives priority to people. I am proud of Korea’s democracy as it is now,” Jang said.

She also said in a eulogy for her two friends who were killed in the tragic accident, Min-jeong and Minj-ji, “I must say that I received this award because of you.”

Park Seok-woon, co-chair of the Korea Alliance of Progressive Movement, who also attended the ceremony, said, “This award carried the meaning that democracy in South Korean has been recognized by the international community.”

In a video message, Seoul Mayor Park Won-soon said: “We should have a democratic system in which people take part. Now, we have confidence that people can recover democracy and make their country a comfortable place to live in.”

Jong Bum-goo, a former South Korean lawmaker who received a doctoral degree in politics as a scholarship student of the German foundation, conveyed his congratulatory words via a video clip, saying: “The candlelight rallies made our democracy an everyday experience. We realized that and are implementing it.”

The ceremony brought together 120 people, including the foundation’s officials and South Korean residents who joined the anti-Park rallies.

Among the participants were Gil Won-ok, one of the Korean victims of sexual slavery by the Japanese military during World War II. Gil was in the German capital to make a donation to an international human rights group committed to protecting refugee women.