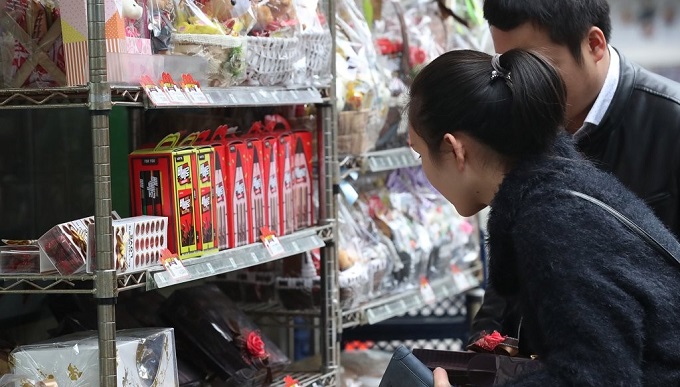 One of the things consumers feel strongly about every Pepero Day is that it is nothing but a commercial holiday. (Yonhap)

It seems that cracks are occurring in a previously popular promotion that has been thriving for 26 years.

One of the things consumers feel strongly about every Pepero Day is that it is nothing but a commercial holiday, a marketing ploy to sell more product.

The word ‘pepero’ is used colloquially to describe a type of snack, but in reality it is a specific product name created by Lotte Confectionery Co., a unit of South Korean conglomerate Lotte Group.

As a result, consumers perceive Pepero Day as if it is different kind of anniversary day similar to Valentine’s Day, essentially a commercial holiday designed for a particular company to sell its products.

On top of that, the issue of the boycott against Japan has been raised this year.

Although there is controversy over whether Lotte Group should be considered a Korean company or a Japanese company, consumers are not happy with the fact that it played a role as a bridgehead for the Japanese flagship companies Uniqlo and Muji.

Furthermore, the increasingly personalized social atmosphere is also contributing to negative sentiment. Young Koreans no longer think that they have to share everything with coworkers, family and lovers like they used to.

In a survey of 958 people conducted by JobKorea and Albamon, South Korea’s top two job search portals, 30.9 percent of the respondents said they felt burdened by Pepero Day.

Moreover, respondents are tired of having an occasion to acknowledge on the 14th of every month.

Valentine’s Day on February 14 and White Day on March 14 are commonly accepted, but Rose Day, Kiss Day, Black Day and many others have failed to gain popularity.

On top of that, the emergence of the millennial generation as the main consumer group is one of the main reasons for the pushback against Pepero Day.

The young generation is sensitive to social issues and irregularities, and young Koreans actively comment on social media, which also affects consumer behavior.

They are willing to open their wallets for companies that they think are ‘just’, while holding boycotts against companies “abusing power” or acting immorally.

For these reasons, Pepero is no longer perceived in positive light. Lotte being a Japanese-based company has also put a damper on the popularity of Pepero.

“This is not an era where we can simply expand marketing,” a source from a retail industry said.

“It has become an era in which consumers are told why this is the right consumption and meaningful consumption,” he advised.