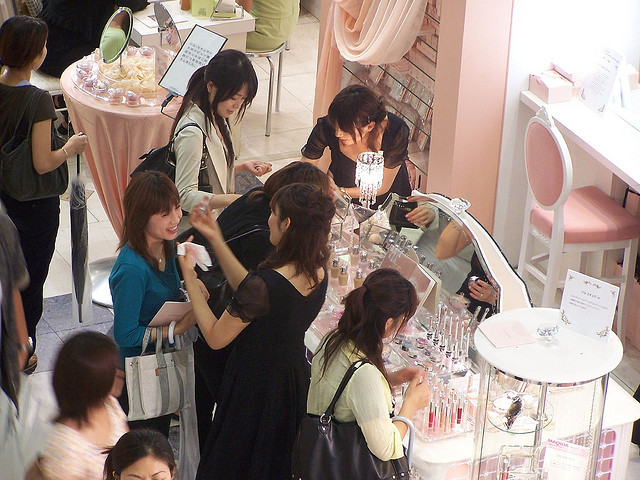 Fashion, cosmetic and other retailers are implementing a “down-aging” marketing strategy which relies on consumers’ desire for rejuvenation. (image: Photocopy/flickr)

SEOUL, Korea, April 3 (Korea Bizwire) – A 33 year-old woman surnamed Kim buys beauty products from a road shop in Myeong-dong. One year ago, when she first visited this store, it took a lot of courage because the brand in particular was known to target women in their 20s.

However, upon taking a step into the store, she realized many customers inside were actually of her age. Kim said, “I often buy cosmetics and clothes from brands for girls in their 20s to keep up with the youthful trend.”

Fashion, cosmetic and other retailers are implementing a “down-aging” marketing strategy which relies on consumers’ desire for rejuvenation. A fashion company official explained that if the company comes up with goods for consumers in their 20s, the older crowds in their 30s and 40s tend to tag along.

The official said, “Sometimes, we advertise certain goods are made for twenty-somethings to attract the leading consumers in their 30s and 40s.”

In fact, the main clientele of boutiques for the 20s at department stores are in the 40s and 50s. At a fashion select shop in Lotte Department Store, which targets ones in their early 20s, customers in their 40s account for 30 percent of total sales.

A cosmetic brand launched by Aekyung called “Age 20 Twenties” has become successful by taking advantage of such down-aging trend. Although the name of the brand suggests that it targets consumers in their 20s, the actual targets are ones in their 30s and 40s.

Famous middle-aged actress Gyeon Mi-ri famed for her baby face was chosen as the spokesperson for the brand in order to appeal to the intended targets. Age 20 Twenties has achieved sales turnover of 2 billion won in five months.

US fashion brand, DKNY has shown off a spring and summer collection which targets the customers in their 20s. Nevertheless, 50 percent of domestic DKNY consumers are in their 30s.

The DKNY lovers, who were in their 20s when the brand was first introduced in Korea, are now in their 30s. The customers in their 40s also have increased from 15 percent to 20 percent.

An official of SK Networks, the domestic distributor of DKNY brand goods, said, “DKNY collections have become younger not only to invite new consumers in their 20s but also to satisfy the needs of existing customers in their 30s and 40s wanting to look younger.”

Non-compliance with the trend of down-aging can result in a huge failure in marketing these days. Lotte Department’s ambitious attempt called “Silver Gift Shop” carrying a variety of dietary supplements, medical supplies and fashion goods for the elders was shut down due to low sales. It turns out that no one, not even the eligible seniors, wants to buy anything from a store with the word “silver” in its name.