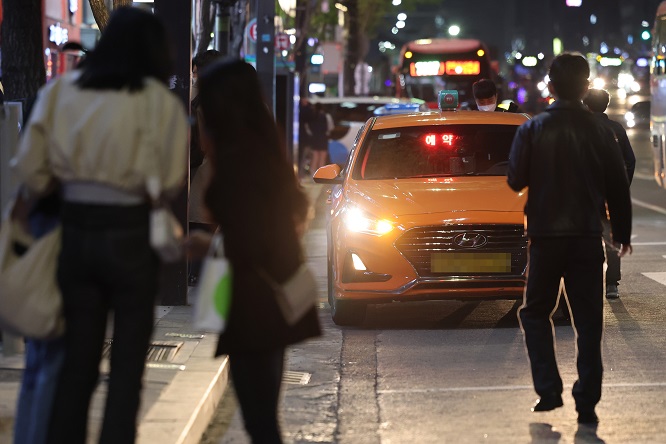 This file photo shows people trying to catch a taxi late at night in Seoul. (Yonhap)

SEOUL, Nov. 2 (Korea Bizwire) — The government has announced follow-up measures to those taken last month to ease the shortage of taxis at night.

First of all, the mandatory resting system for privately owned taxis will be fully lifted from Nov. 22 for the regions suffering from a shortage of taxis at night, including the greater Seoul area.

This system will be lifted for the first time in 49 years, after having been introduced in 1973.

The Ministry of Land, Infrastructure and Transport noted that the mandatory resting system for privately owned taxis that was introduced to save energy after the oil shock in the 1970s is deteriorating the supply of taxis.

Drivers affiliated with taxi companies will also be allowed to park all night in non-garage areas.

Previously, they were required to return to the garages located in the urban outskirts after completing late-night operations, and park their taxis there for work shifts.

During the course of returning to the garages, so-called “passenger cherry-picking” occurred. Drivers also suffered huge inconveniences in commuting.

Against this backdrop, the ministry decided to allow drivers to operate the same taxi for more than two days as well as to park their taxis all night in non-garage areas when they have a separate parking space.