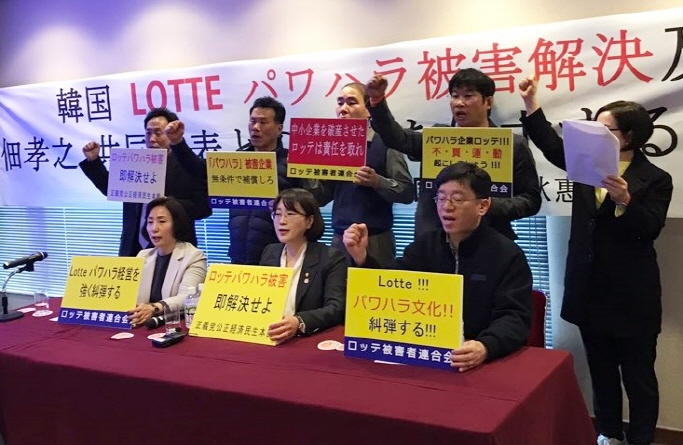 Aha M Tech Co., a construction subcontractor, claimed that Lotte Engineering and Construction Co. forced the company to sign a contract at an extremely low price, conduct projects not included in the contract, and failed to deliver payments.

Canaan Natural Co., a rice seller, said it had built a rice processing complex after receiving a proposal from Lotte International Co. that it would purchase a large amount of rice from the company, a promise that the company has failed to keep.

Seongseon Fruit claimed that Lotte Mart forced it to deliver products at an unacceptably low price during promotional events.

Lotte Mart has also been accused of selling products to customers at an unreasonably low price and sharing only 85 percent of the sales with the company.

“Our survival is at risk, because of Lotte’s wrongful behavior,” said the association. “We sustained collective losses of 49 billion won (US$43 million) and had to lay off more than 500 employees.”

Rep. Chu Hye-seon emphasized that Lotte “can resolve the issue if it only has the will,” just like how Samsung Semiconductor “was able to reach a settlement with its employees who have fallen victim to leukemia due to dangerous working conditions”.

“Lotte, however, is not showing any signs of regret over the situation,” she added.

“We have come to Japan to protest against Lotte Holdings and tell the company about the uncomfortable truth behind Lotte’s way of doing business in South Korea.”

The Association of Lotte Victims visited Lotte Holding’s headquarters in Shinjuku to request a meeting with Takayuki Tsukuda, CEO of Lotte Holdings Co.

Lotte has claimed that the claims made by the association fall short of qualifying as ‘unfair treatment’.

“We are currently in a mediation process with a number of cases already closed. We hope that the issue can be concluded on rational terms,” said Lotte.