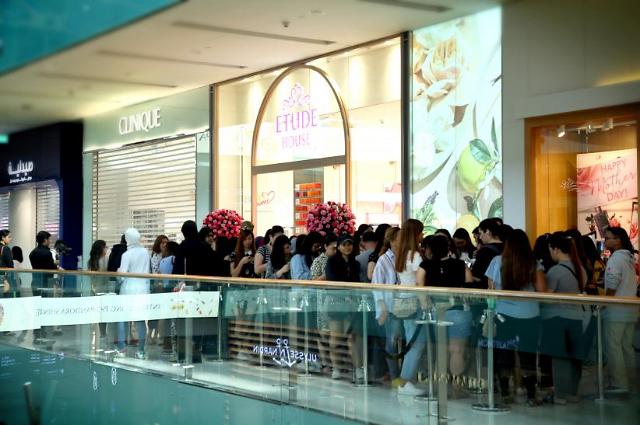 Consumers wait in line to enter its first Etude House store in the Middle East in Dubai. (image: Etude Corp.)

SEOUL, Apr. 26 (Korea Bizwire) — South Korean cosmetics makers said Thursday they are making inroads into new markets as part of their efforts to diversify sources of income after being hit hard by China over a missile row last year.

“It is a significant step forward which shows that belif’s competitiveness has been acknowledged in Europe, the home of cosmetics,” a company official said. “It symbolizes the brand’s expansion into the global market.”

The announcement came two days after LG Household & Healthcare said its affiliate will purchase Japanese cosmetics firm Avon Products Co. for 10.5 billion yen (US$97.6 million) in its latest move to strengthen its foothold in Japan.

According to market researcher Euromonitor International, Japan is the third-largest beauty and personal care market in the world as of last year, with an estimated market size of $36.1 billion. The figure is expected to reach $38.5 billion in 2022.

Previously, Korean cosmetics had not shown significant growth in the neighboring country given the availability of products sold by local manufacturers, Kimura added.

LG Household & Healthcare’s acquisition is in line with local retailers’ broader moves to diversify their overseas business portfolios, which had been heavily reliant on Chinese customers.

Korean manufacturers and retailers suffered a plunge in revenues after China banned sales of Korea-bound group tours in March last year in retaliation over Seoul’s decision to deploy a U.S. missile defense system.