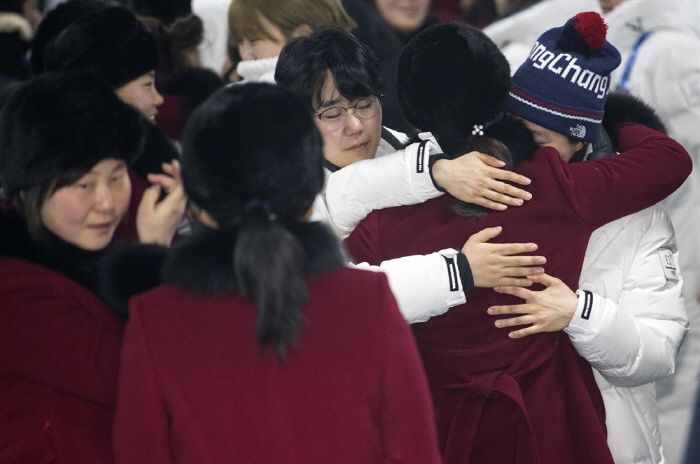 GANGNEUNG, Feb. 26 (Korea Bizwire) — South Korea women’s ice hockey players on Monday bid a teary farewell to their North Korean teammates on the unified Korean team for the PyeongChang Winter Olympics, a day after they marched in together at the closing ceremony.

The historic joint hockey team — the first unified Korean squad in any sport at any Olympics — was assembled on Jan. 25, five days after the International Olympic Committee (IOC) approved an inter-Korean agreement on its formation. The South Korean team of 23 players was joined by 12 players from North Korea, with the South’s head coach, Sarah Murray, in charge.

Murray and some of the South’s players had reservations about bringing a dozen new players into the fold only weeks before the start of the Olympics. But the players became fast friends, dining and spending more time off the ice together.

And when it came time to say goodbye at Gangneung Olympic Village, tears flowed from the eyes of several players on both sides. The 12 North Koreans exchanged hugs with about 10 South Koreans, including alternate captain Jo Su-sie, inside the Welcome Centre before boarding their bus home.

And once the North Koreans were on the bus, the South Korean athletes opened the windows from the outside as they shook hands one last time.

Murray and her staff also came out to see the players off, an occasion that she said was “sad.”

“It just shows what we did was really special,” Murray said. “We can feel this way about the players and we’ve only been together for three weeks. It says something about our team. It’s really special.” 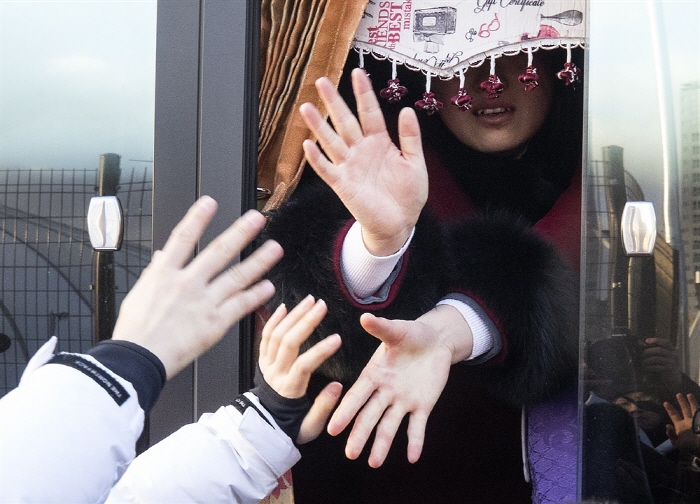 South Korean player Choi Ji-yeon was particularly close to North Koreans. She said she prepared a hand-written letter for each of the 12 North Korean players the previous night and also printed out cell phone photos she’d taken with them as souvenirs for her departing former teammates.

“I told them I would miss them so much because we became very close over the past couple of weeks,” Choi said, wiping away tears. “I hope to see them again, but I know it’s going to be difficult.”

Whether the Koreas will be united again at future hockey competitions remains to be seen. They play at different tiers of the International Ice Hockey Federation (IIHF) Women’s World Championships, with South Korea in Division I Group B and North Korea a notch below in Division II Group A.

IIHF President Rene Fasel has said he’d consider having discussions on another joint team for the 2022 Beijing Winter Games if South Korea qualifies for the event, though the message of peace just won’t be the same in China as it was in South Korea.

The North’s hockey players were joined by the country’s sports officials, including chief delegate Won Kil-u, and athletes in figure skating and short track speed skating.

North Korea had 22 athletes for PyeongChang 2018, the most it has had at any Winter Olympics, but didn’t win any medals.

The joint hockey team lost all five of its games by a combined margin of 28-2.

Under the IOC’s provision, Murray was forced to dress at least three North Koreans each game. She played between three and four players, and forward Kim Un-hyang was the only North Korean to play in every game.

The process leading up to the formation of the team divided South Korea. One camp said this was an important step toward peace on the Korean Peninsula, while the other side countered that there was only so much sports could do to help inter-Korean relations.

But during the Olympics, the IOC and PyeongChang’s organizers both tried to paint a positive picture of the team.

IOC President Thomas Bach hailed the unified team as a symbol of peace. During the opening ceremony, South Korean player Park Jong-ah, who was also the team captain, and North Korean player Jong Su-hyon carried the Olympic torch together and delivered it to the cauldron lighter, figure skating icon Kim Yu-na.