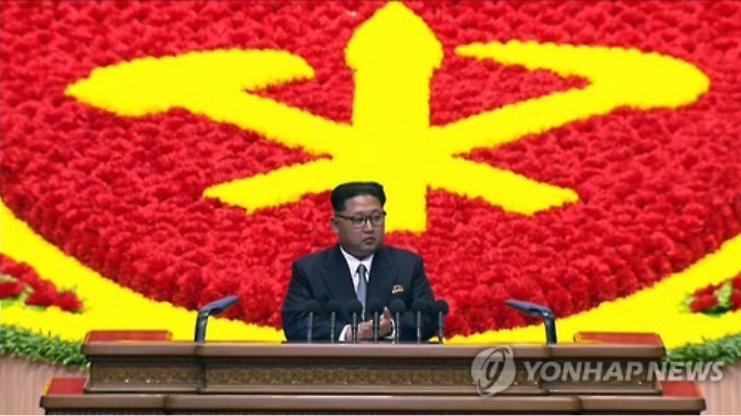 North Korean leader Kim Jong-un delivers a speech at the party congress of the Workers’ Party of Korea (WPK) held in Pyongyang on May 7, 2016. (image: Yonhap)

SEOUL, May 9 (Korea Bizwire) – South Korea said Sunday that North Korea’s offer for inter-Korean dialogue is merely a propaganda ploy that lacks sincerity, calling on Pyongyang to give up its nuclear weapons program.

North Korean leader Kim Jong-un proposed holding military talks between the two Koreas in a bid to ease tensions along their tense border at the congress of the Workers’ Party of Korea (WPK) which kicked off on Friday, according to the North’s state-run media.

South Korea’s unification ministry rejected the North’s idea, branding it as a sheer propaganda campaign with no authenticity.

“The North’s proposal is merely its propaganda drive with no sincerity as it speaks of inter-Korean dialogue while continuing to develop a nuclear arsenal,” the ministry said in a statement. It pointed out that the North has not halted its provocations targeting the South.

Seoul urged Pyongyang to choose the path toward denuclearization if it hopes to bring peace and rapprochement to the divided peninsula.

At the party gathering, the North’s leader made it clear that he will “permanently” defend the pursuit of his signature policy of developing nuclear weapons in tandem with boosting the country’s moribund economy, commonly known as the “byeongjin” policy.

He also called his country a “responsible nuclear weapons state,” adding that Pyongyang will not use its nuclear arms first unless its sovereignty is threatened by other countries with nuclear bombs.

The North Korean leader, who took power after the sudden death of his father in late 2011, vowed that Pyongyang would “fulfill” its non-proliferation obligations and push for global denuclearization. The country withdrew from the Non-Proliferation Treaty (NPT) in 2003 as it began pursuing its nuclear buildup, despite warnings by the international community.

“South Korea and the international community have the same stance that North Korea should not be recognized as a nuclear-powered state,” the ministry said.

The government said that Kim’s message demonstrates that the communist country has no intention of giving up its nuclear weapons program.

“If Pyongyang sticks to the parallel pursuit of nuclear and economic development, the North will face tougher international sanctions and deeper isolations,” said a unification ministry official. “Seoul will put pressure on Pyongyang to abandon its nuke development aspirations.”

South Korea’s foreign ministry said in a separate briefing that the North’s comments on “global denuclearization” appear to mean that the North will not give up its nukes until the world is free of nuclear weapons.

“North Korea only reaffirmed its stance that it will stick to nuclear weapons development,” stressed a foreign ministry official.