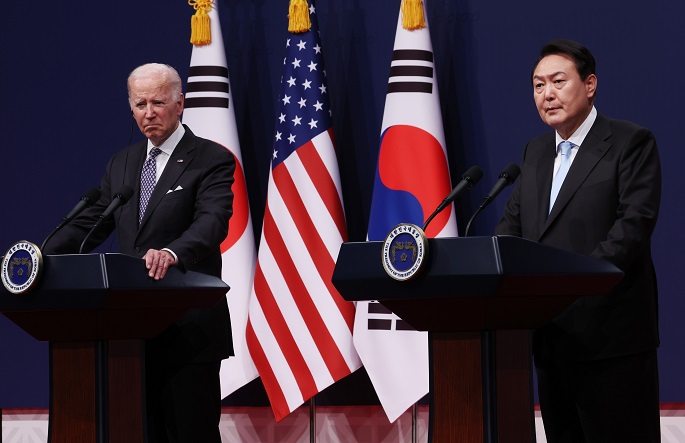 South Korean President Yoon Suk-yeol (R) speaks during a joint news conference with U.S. President Joe Biden after their talks at the presidential office in Seoul on May 21, 2022. (Yonhap)

SEOUL, May 21 (Korea Bizwire) — South Korean companies could find themselves attempting a precarious balance between Washington and Beijing, as Seoul announced its decision to join a new U.S.-led regional economic initiative that does not include China.

President Yoon Suk-yeol said Saturday that South Korea and the United States will work together to develop the Indo-Pacific Economic Framework (IPEF).

“The Indo-Pacific region is crucial both for South Korea and the U.S.,” Yoon said in a joint press conference in Seoul following his first summit with U.S. President Joe Biden.

“The two countries will work together to build a rule-based new order in the region, and the first step for the goal is to join the IPEF.”

Yoon will virtually attend a summit in Tokyo, Biden’s next stop where he is set to formally launch the IPEF.

The new partnership, first announced in October, is Biden’s strategy for the region, where the U.S. is trying to restore American leadership in the face of “mounting challenges, particularly from China,” the White House said.

China’s “coercion and aggression spans the globe, but it is most acute in the Indo-Pacific,” it said.

The framework seeks to improve supply chain resilience and set rules for the digital economy, clean energy and decarbonization, among other things.

The launch is also viewed as Washington’s strategic move to fill the void left in the region after then President Donald Trump withdrew from the Trans-Pacific Partnership in January 2017.

Earlier this week, South Korea confirmed it would join the IPEF, citing the need to strengthen the resilience of supply chains, and the preparedness for a pandemic and climate change.

“There is a pandemic-induced paradigm shift in the global trade environment, with focus moving to resilience away from effectiveness,” the Ministry of Trade, Industry and Energy said in a statement, adding the focus has expanded beyond market-access tools and tariff cuts. 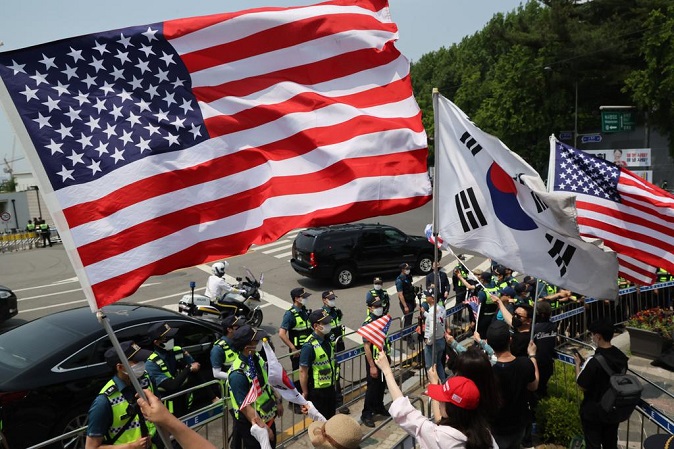 Supporters wave South Korean and U.S. national flags in front of a hotel in Seoul on May 21, 2022, as U.S. President Joe Biden leaves for the presidential office to hold a summit with President Yoon Suk-yeol. (Yonhap)

South Korean industry experts consider the IPEF to be the right platform to better respond to a transitional period when a host of new trade issues emerges, it said.

The new platform is expected to help “diversify and stabilize supply chains of semiconductors, clean energy and key minerals.”

South Korea’s joining of the IPEF is expected to diversify its “trade partners, and reduce trade and economic dependence on a few particular countries,” said Kyungjin Song, head of the Seoul-based Innovative Economy Forum.

The ongoing chip shortage, which has hurt the production of cars and consumer appliances around the globe, seems to support the idea of Biden’s new supply chain initiative.

Washington has doubled down on its efforts to address the global supply crunch of key materials since last year and to counter China’s growing influence on the global tech industry.

On Friday, Yoon and Biden jointly toured a Samsung Electronics chip plant soon after Biden arrived in South Korea, a symbolic gesture that underscored the two countries’ commitment to working together to strengthen supply chains.

“I hope that through today’s visit, the South Korea-U.S. relationship will be born again into an economic security alliance based on cooperation on cutting-edge technology and supply chains,” Yoon said at the facility in Pyeongtaek, 70 kilometers south of Seoul.

Biden vowed to work with close partners, like South Korea, that share the U.S.’ values to bolster supply chain resilience.

“We have witnessed U.S.-Korea economic ties taking more strategic importance through further collaboration in key sectors, such as semiconductors, electric vehicle batteries and pharmaceuticals,” said James Kim, chairman and CEO of the American Chamber of Commerce in Korea.

The IPEF is expected to help South Korea “lead global discussions in critical sectors, such as the digital economy, carbon neutrality and clean energy,” Kim added. 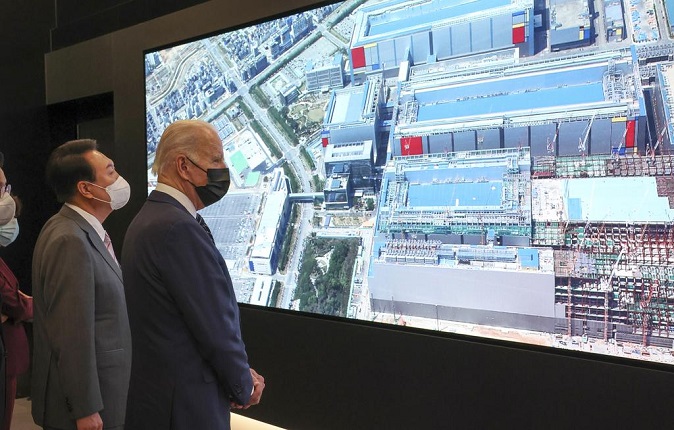 But aligning with the U.S. for the regional supply chain network and security assurances could run the risk of provoking Beijing to mount retaliatory acts against South Korea and its companies.

“China is closely following the U.S.-proposed Indo-Pacific Economic Framework (IPEF). Regional cooperation should not target any third party or harm their interests,” Zhao Lijian, spokesperson for the Chinese Ministry of Foreign Affairs, tweeted.

Seoul’s participation in the IPEF could mark a departure from its foreign policy of so-called “strategic ambiguity,” balancing between security ally Washington and its biggest trade partner, Beijing.

Kim Hyun-wook, professor at the Institute of Foreign Affairs and National Security, said there will be “some protest from Beijing,” but the scale of the protest would be less severe than witnessed following the deployment of the U.S.-made THAAD missile defense system in South Korea in 2017.

China launched an aggressive campaign of economic retaliation against South Korea in protest against the installation, by blocking market access of South Korean goods and services in a wide array of industries.

“Striking a perfect balance between China and the U.S. is impossible. South Korea should be part of the IPEF, because Washington made clear that it will give economic benefits to the nations that are part of the U.S.-led global supply chain,” Kim said, adding it was Seoul’s strategic decision to “choose the U.S. over China when a collision occurs between the two nations.”

“We need to wake up from the wishful thinking that we could enjoy the benefits from both countries,” he said.