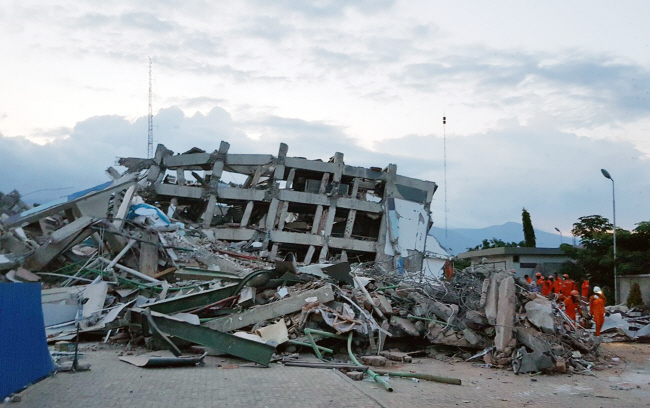 This photo taken on Oct. 2, 2018, shows a collapsed hotel in Palu, Indonesia, which was hit by a 7.5-magnitude earthquake and tsunami the previous week. (image: Yonhap)

SEOUL, Oct. 4 (Korea Bizwire) — Two major South Korean companies on Thursday joined international efforts to help support Indonesia, which was hit by a deadly earthquake and tsunami last week, amid rising concerns over the safety of survivors in the region.

South Korea’s largest carmaker, Hyundai Motor Group, said it will donate US$500,000 worth of support, including vehicles, to Indonesia for restoration work, becoming the latest South Korean firm to provide emergency relief aid to the quake-hit country.

Hyundai Motor said it will consult with the Indonesian government to work out details on how to use the fund.

Earlier in the day, KT&G Corp., a major South Korean tobacco maker, also said it offered 100 million won ($88,700) to Indonesia. The donation, handed over to the Korean Red Cross, will be used for the purchase of relief goods and restoration of damaged areas, it said.

“We hope the two countries become partners that share difficulties, beyond the level of economic cooperation, through Korean firms’ active support,” said Kim Oe-hyun, who is in charge of KT&G’s social fund.

The Indonesian authorities have appealed medical support and necessary materials from the international community after a 7.5-magnitude quake hit the country’s Sulawesi island last Friday.

The disaster killed at least 1,407 people, according to foreign media reports, and the death toll is expected to rise.