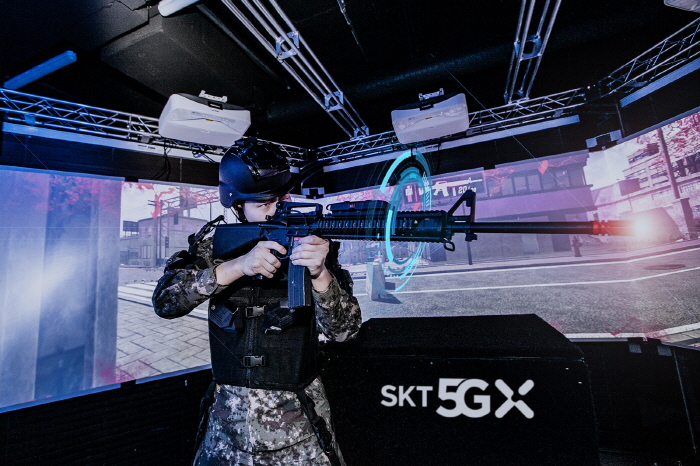 SEOUL, May 3 (Korea Bizwire) — Technology plays an integral part in modern warfare, and its role is even more important for countries like South Korea, which faces constant threats from North Korea.

In line with changing battlefield dynamics, the South Korean military has been pushing for ways to train soldiers in simulated environments using the latest technologies, such as virtual reality (VR) and augmented reality (AR).

The Korea Military Academy has joined hands with local companies to develop VR and AR training programs for its Army cadets, which will be available on its Seoul campus later this year.

Experts say one of the key advantages of VR is the ability to immerse users in a virtual, yet safe, world, reducing costs and risks associated with battlefield training.

“Training soldiers using VR and AR content can save on the considerable budget for large-scale training and reduce risks from dangerous environments,” Kim Tae-kyu, a game professor at Kwangwoon University in Seoul, said. “It will be more beneficial when combined with real battlefield experiences.”

Among them, first-person shooting games, in which players are positioned behind a gun, will be adopted as part of training courses for cadets to fight enemies or terrorists.

With true-to-life guns and a VR headset, soldiers can eliminate enemies by themselves or fight as a team in different warfare scenarios and get feedback on their performance after shooting.

The simulated training is designed to reflect realistic combat environments, like engaging with moving targets in the night, according to Optimus System, a Korean assault rifle shooting simulator developer that collaborated on the military academy’s VR training.

“The system allows soldiers to engage in a fight as part of friendly or enemy forces, giving multidimensional battlefield experiences,” Kim Nam-hyuk, CEO of Optimus, said. “Trainees can actually feel like a bullet is coming out of their guns, which are designed as similar to actual rifles.”

The AR program is designed to provide detailed geographical information on the local map, such as contour lines and grids, and calculates effective firing ranges for different types of artillery, the academy said.

To accelerate the deployment of the new training program, the military academy last month signed a memorandum of understanding with local carrier SK Telecom Co. to build 5G infrastructure on the campus.

When the fast, low-latency network is ready, it will allow up to 200 cadets to engage in the virtual drills simultaneously and make use of 3D maps for field commanders, SKT said.

“The AR-based command control exercise will allow cadets to make a more precise judgment in a war game, with a 3D map floating in front of their eyes,” SKT said.

The advanced network and technology is also expected to change the daily scene of cadets in gyms and classrooms.

SKT said each cadet will be provided with a wearable digital device for physical monitoring. When combined with big data and 5G, it will provide personalized health checkup assistance for cadets in real time, the company said.

This advanced training scheme is part of the government’s broader plans to create a “smarter yet slimmer military” under the “Defense Reform 2.0″ initiative. 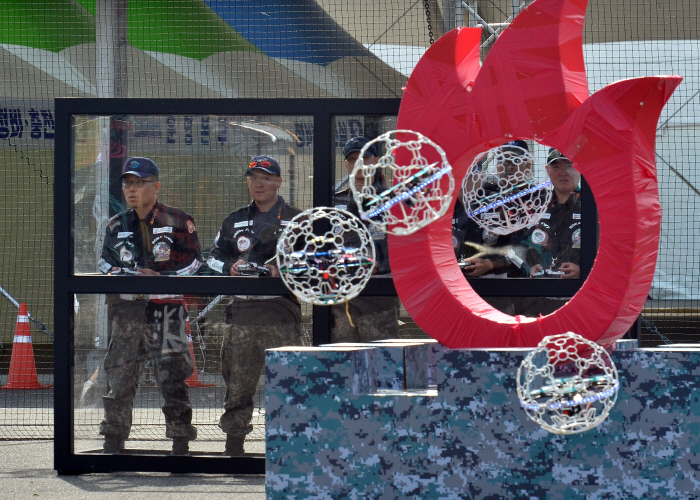 Army officers compete in a dronebot contest at Gyeryongdae, an integrated military base in South Chungcheong Province, on Oct. 8, 2018. (image: ROK Army)

The defense ministry earlier said it will increase the ratio of research and development (R&D) spending from 6.9 percent in 2019 to 8.5 percent in 2023, planning to assign 21.9 trillion won (US$18.7 billion) to develop new weapons and military technology over the next five years.

The defense initiative also reflects growing concerns over a shrinking pool of soldiers amid the stubbornly low birth rate in Asia’s fourth-largest economy. In South Korea, all able-bodied men should serve about two years in the military.

“As the futuristic technologies rapidly evolve in the era of the Fourth Industrial Revolution, we have to step up efforts in defense R&D efforts to improve competitiveness in the global market,” Defense Minister Jeong Kyeong-doo said at the parliament last month.

While the training based on mixed reality can help train soldiers in more real-life situations, it is considered at an early stage in the defense world due to security concerns and technological hurdles.

Experts say VR and AR technologies are still quite immature and require further development to become mainstream training programs, making them complementary tools at this stage.

Use of the latest technology powered by 5G networks also involves potential security issues, such as cyberattacks from adversaries, they noted.

“Technical limitations remain as the current VR headsets could cause dizziness when used for a long time,” professor Kim said. “And there are only limited types of AR glasses, which need to evolve for real-life experiences along with more realistic visual content.”