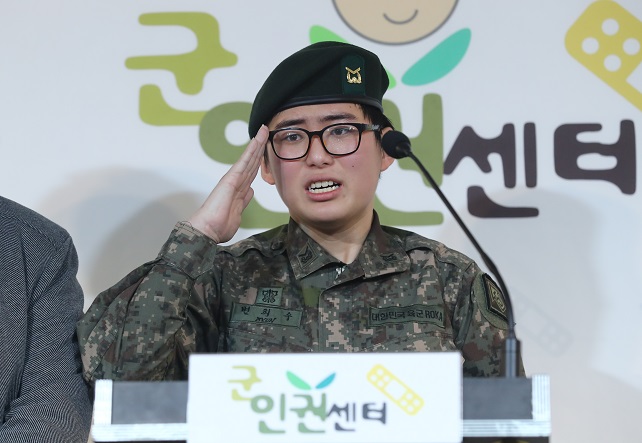 This undated file photo shows Byun Hee-soo, a transgender solider, who was found dead at her home in Cheongju, 150 kilometers south of Seoul, on March 3, 2021, after being forcibly discharged from the Army the previous year. (Yonhap)

SEOUL, Dec. 1 (Korea Bizwire) — The Army has decided not to recognize Byun Hee-soo, a transgender soldier in her 20s who was found dead last year after being forcibly discharged from service, as having died in the line of duty, military authorities said Thursday.

In a committee meeting held earlier in the day, the Army classified Byun’s case as a “general death,” a distinction referring to those in mandatory military service who died due to negligence or misconduct and are not recognized as an on-duty death, they said.

Currently, deaths of South Koreans serving in the military are divided into three categories: death in action, death on duty and general death.

The nine-member panel, which consists of five civilian experts and four active-duty soldiers, deemed that Byun’s death had no “significant causal connection” with her military service, the Army said.

A coalition of 33 civic groups, including the Center for Military Human Rights Korea, protested the Army’s decision, calling it a “discriminatory” move.

“The military is not acknowledging Staff Sgt. Byun as a soldier and it is shirking its responsibility because (Byun) was transgender,” the coalition said in a statement.

“The refusal to acknowledge her as having died in the line of duty is clearly a discriminatory act,” it added.

The decision is nevertheless considered an acknowledgment of Byun’s death as a soldier, which will allow her family to receive financial support, including a funeral allowance and compensation for her death.

Byun underwent surgery in Thailand in 2019, two years after voluntarily enlisting, and expressed her desire to keep serving in the military as a female soldier. But the Army decided to compulsorily discharge her in January 2020.

She later filed a suit over its decision to discharge her against her will but died in an apparent suicide in February last year.

In October last year, the justice ministry ordered the military to drop its plan to challenge a court ruling that said it was unjust for the military to discharge Byun over her gender reassignment surgery.

Thursday’s decision also comes after a presidential committee on military deaths urged the defense minister in April to classify Byun’s case as an on-duty death.