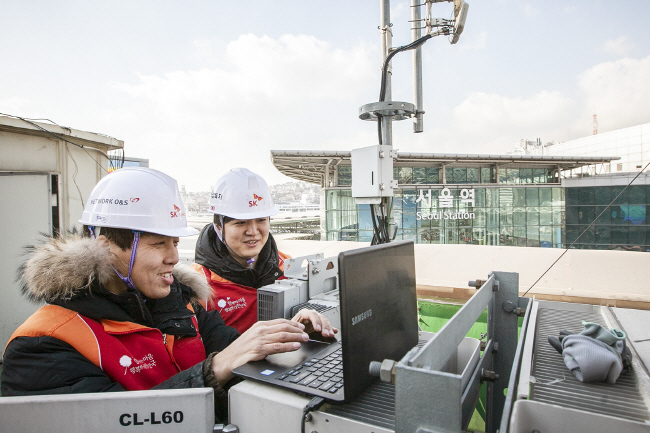 Employees of SK Telecom Co. check a base station near Seoul Station ahead of the Lunar New Year holiday on Jan. 29, 2019. (image: SK Telecom Co.)

The Lunar New Year falls on Tuesday this year, and the holiday period begins Saturday.

To handle heavy data, local telecommunication companies have expanded their network capacity on highways, while having backup systems ready for emergencies.

Top mobile carrier SK Telecom Co. said it expects the usage of long-term evolution (LTE) data to reach up to 422.8 terabytes per hour Monday, up 20.4 percent from the same period on a weekday basis.

Its map and navigation service and overseas roaming services were also expected to be busy during the holiday, the firm said.

No. 2 player KT Corp. said it will operate an emergency system to provide stable mobile service on highways, train stations, shopping centers and other tourism attractions during the holiday season.

It has set up a special monitoring system at 10,000 LTE and 3G base stations round the clock to prepare for emergency situations.

KT’s image was tainted after its switching station in western Seoul caught fire in late November, paralyzing the company’s mobile and Internet services in extensive areas of the capital for days.

“We have stepped up monitoring of the network quality to help our customers enjoy the holiday without experiencing inconvenience,” said Ji Jung-yong, who is in charge of the company’s network system management.

The company said it will also monitor mobile traffic during the period to deal with increased viewing of live stream broadcasts and video-on-demand via smartphones.