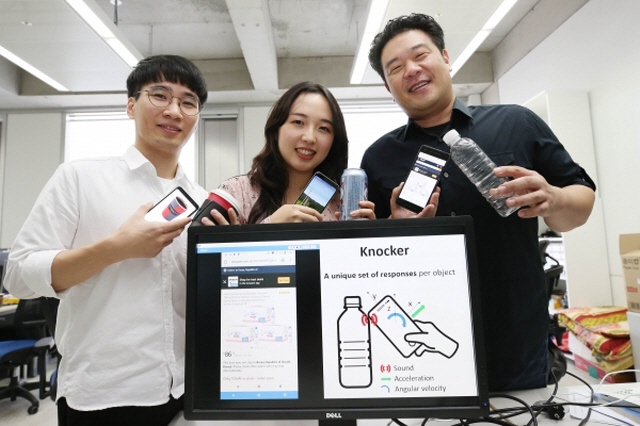 Knocker technology analyzes responses caused by tapping a smartphone on an object through machine learning. (image: Korea Advanced Institute of Science and Technology)

SEOUL, Oct. 2 (Korea Bizwire) — New advancements from South Korean researchers should soon allow smartphone users to simply knock on an object using their phone to automatically determine what type of object it is.

It is expected that this technology will be used for new services such as tapping a smartphone against a water container to order water.

The Korea Advanced Institute of Science and Technology (KAIST) said Tuesday its own research team had developed so-called “knocker” technology and announced it at the ACM Ubiquitous Computing Academic Conference last month.

Knocker technology analyzes responses caused by tapping a smartphone on an object through machine learning.

Response data is detected by the smartphone’s microphone, accelerometers, and gyroscopes.

Because the technology does not use existing recognition devices such as cameras and RFID electronic tags, it can be applied to dark places where cameras are difficult to use or to devices without electronic tags.

Researchers input data of 23 types of objects that are accessible in daily life, such as laptop computers, water bottles and bicycles, and evaluated the accuracy of recognition.

However, the accuracy dropped to 83 percent in noisy spaces such as crowded roads and restaurants. In addition, the time of recognition was only 0.2 seconds.

It is predicted that if the new technology is applied, areas where smartphones are used could be expanded.

Researchers showed 15 use cases such as tapping an empty bottle with a smartphone to automatically order water, and tapping one’s bed to turn off the lights before going to sleep.

“These results are more meaningful because knocker technology uses sensor combination and machine learning from existing smartphones without special sensors or hardware development. It is also easy for any smartphone user to use it,” said Lee Sung-joo, the professor at KAIST who led the research team.