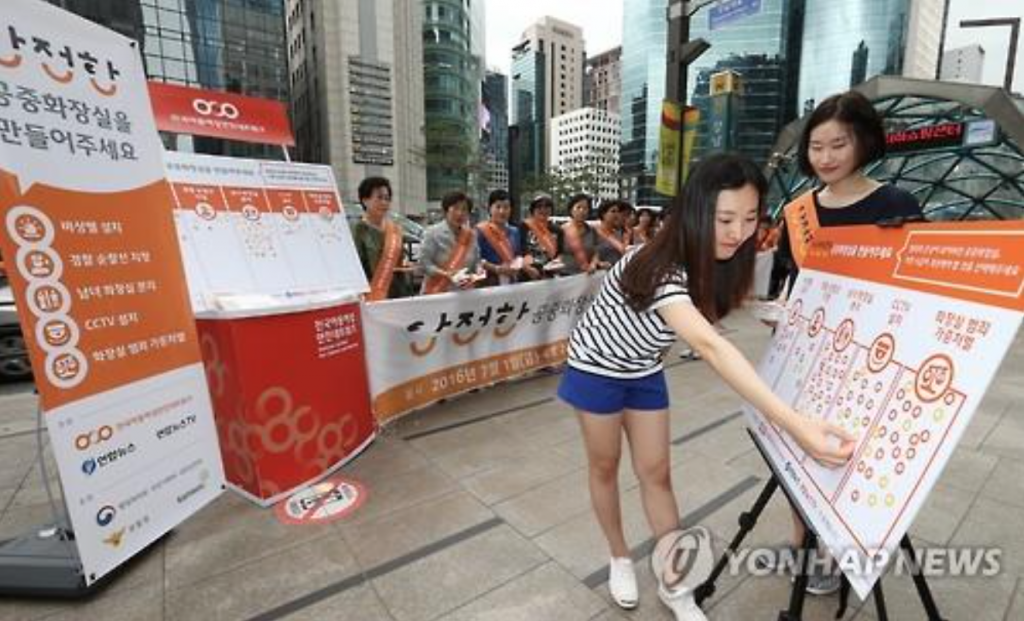 Campaign promoters from South Korean civil organizations held a public rally for women’s safety in public restrooms on July 1, 2016, in the wake of the controversial bathroom homicide in Gangnam, southeastern Seoul. (image: Yonhap)

SEOUL, July 1 (Korea Bizwire) – South Korean government agencies, a local media outlet and civil organizations on Friday joined together to promote women’s safety in public restrooms in the wake of the controversial killing of a woman in a public bathroom in Seoul in May.

The 23-year-old woman was stabbed to death by a man with a history of mental illness in the unisex restroom of a building near the busy Gangnam subway station on May 17.

The case sent shockwaves nationwide, as the attacker told the police that he waited for about 40 minutes for any woman to walk in because he had always been “ignored” by them.

In the safety campaign event co-hosted by the Ministry of Gender Equality and Family, Seocho District Office, Seocho Police Station and Yonhap News Agency, participants marched from Gangnam Station to the scene of the incident as a protest against society’s low awareness of women’s safety in public places. About 20 non-government organizations also took part.

“I frequently go to PC rooms to play games, and after the stabbing, I became increasingly afraid of using their public bathrooms,” said Kim Hee-soo, 30. Kim, who lives and works near Gangnam Station, wished that entertainment facilities in the neighborhood would provide separate bathrooms for men and women.

During the rally, the participants called for the compulsory provision of separate bathrooms for men and women and the installment of surveillance cameras near public bathrooms. In addition, the marchers demanded the government set up emergency alarms inside the women’s restrooms as a hot-line to the local police. Tougher punishment against violence in public toilets was also on the campaign runners’ agenda.

“I think it is necessary to have these kinds of campaign posters (about women’s safety in public restrooms) sticking out here and there, so that people can naturally develop related ideas,” said a 56-year-old man, as he passed by the rally

Some of the young women passers-by showed concern that the campaign may only have a short run.

“I hope the campaign doesn’t come and go like one of those short-lived public campaigns. We need more active, lasting campaigns (about women’s safety) that are not forgotten after a short while,” said Yang Jung-eun, 20, a freshman in college.