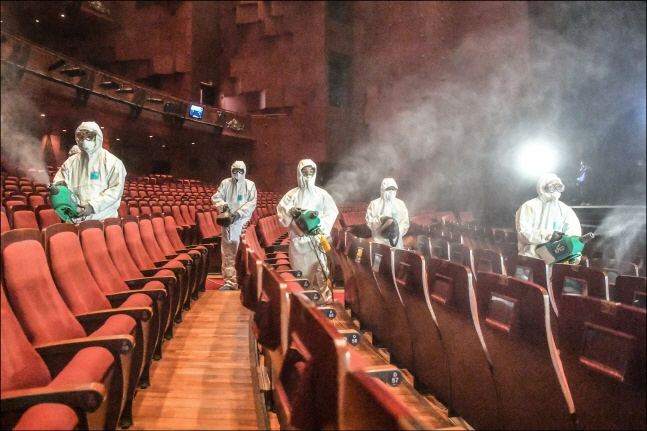 Officials disinfect a concert hall at Sejong Center for the Performing Arts, in this file photo taken Jan. 30, 2020, and provided by the center.

Aggregate ticket sales of musicals, plays, classical concerts and other performances reached 4.68 billion won (US$3.84 million) in April, according to the data from the Korea Performing Arts Box Office Information System (KOPIS).

The KOPIS data also showed that the number of concerts and shows staged last month fell to 2,151 from 2,325 for March and 5,087 for February.

The downside trend came as the COVID-19 pandemic has kept people at home for months. South Korea has reported nearly 11,000 confirmed cases of the novel coronavirus since its first case on Jan. 20.

Last month, two cast members of the musical “Phantom of the Opera” tested positive for the virus, and the show had been suspended for two weeks.