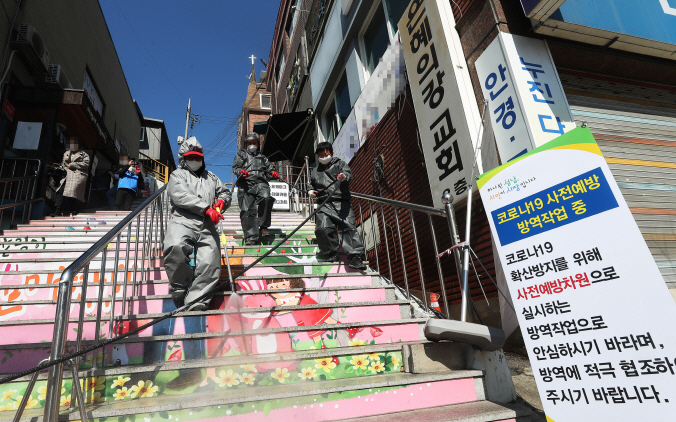 Seongnam city officials disinfect the neighborhood of River of Grace Community Church, where 46 members have tested positive for the coronavirus, on March 16, 2020. (Yonhap)

SEOUL, March 17 (Korea Bizwire) — As cases of mass coronavirus infections are breaking out at a number of churches around Seoul, people are criticizing Protestant churches that insist on holding services despite the current outbreak.

Recently, a case of mass infection at the River of Grace Community Church in Seongnam, just south of Seoul where 55 members were found to be infected by the coronavirus, has thrown local society into a spiral of fear.

Following a series of massive outbreaks at the Shincheonji religious sect, Buddhist temples and Catholic churches have shut down their weekly gatherings.

Many Protestant churches, however, insisted on holding services despite calls to move worship online.

The Communion of Churches in Korea and the United Christian Churches of Korea, for one, are insisting on offline services while admitting that there are alternative means of holding worship services.

Protestant churches say that despite social trends, members in the conservative wing still opt for offline gatherings, because of biblical belief as well as the special circumstance in which the Korean church is currently placed.

“It is a duty and privilege for a Protestant to gather on the day of Jesus’s resurrection and celebrate as they engage in worship,” said a source familiar with the Protestant church.

“The churches have rooted offline gatherings as a basis for their social function.”

He compared the current state of Protestant churches in Korea with the Parable of the Wedding Feast found in Luke 14:12-24 in the Bible.

In the parable, a man once held a great banquet and invited many, most of whom refused to come as they made excuses.

The man then asked his servant to bring in the poor and crippled and blind and lame, saying that “none of those men who were invited shall taste my banquet.” 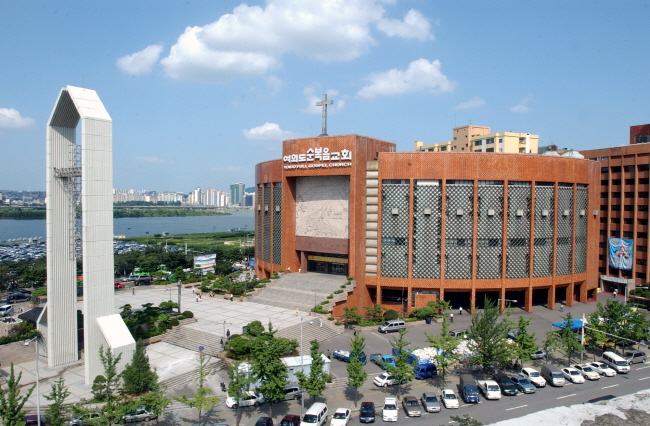 “The Korean church remembers the historical experience of shutting down all worship services, forced by the government during Japanese rule. They may think that putting a stop to offline gatherings is an act of betrayal,” he said.

“They may also be eyeing the drop in the amount of weekly offerings.”

“Biblical history tells us that worship came in various sizes and shapes. Chapels were held under various circumstances, like the holy Sabbath was kept in different ways. Today’s churches are still not perfect when it comes to addressing disabled persons and aged seniors,” argued Prof. Ahn Kyo-seong from the Presbyterian University and Theological Seminary.

“Is this what churches are? A weak and fragile institution if deprived of a Sunday morning worship service?”

“We have to be able to abandon the church building if it becomes a source of the coronavirus,” said a pastor who requested anonymity.

“Shutting down offline gatherings is not an infringement upon religious freedom, but a consideration upon churches as public locations.”