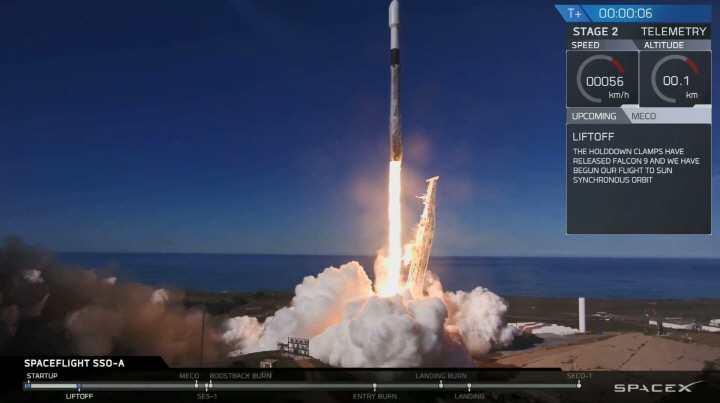 (image: Ministry of Science and ICT)

The Next Sat-1, which lifted off from the Vandenberg Air Force Base in California at around 10:34 a.m. Monday (local time) aboard the Falcon 9, made contact with ground stations, the Ministry of Science and ICT said.

The 107-kilogram satellite, developed by the Korea Advanced Institute of Science and Technology (KAIST) from 2012-2018, reached its orbital altitude of 575 kilometers, an official said.

The ministry said the Svalbard satellite station located in the Arctic Circle established initial contact followed by signals being received by KAIST in South Korea about six hours and 30 minutes after the launch, the ministry said.

The ministry said all of the satellite’s solar panels have been deployed properly, allowing it to generate power.

“The successful launch of the Next Sat-1 was possible not only due to endless efforts and passion of the KAIST researchers but also the help of researchers from all fields,” Choi Won-ho, a ministry official, told reporters in Seoul.

Starting February, the satellite will measure space radiation and observe infrared light from the stars for two years, following a three-month period of preparations, officials said.

The launch was first delayed when American rocket company SpaceX, founded by Elon Musk, extended an inspection of its two-stage rocket, the Falcon 9. The launch was further pushed back multiple times due to various weather conditions.

It is a groundbreaking launch for SpaceX in numerous ways as not only is this the first time the company has reused the rocket for a third time but it is the biggest batch of satellites that has ever taken off on a single launch from U.S. soil.

The Falcon 9 safely reentered the atmosphere and landed after about eight minutes of flight.

Experts forecast the launch would open the new horizons for spaceflight, with SpaceX hoping that the Falcon 9 rocket would be able make numerous trips into space, thus reducing costs.

The rocket’s payload included 15 microsatellites and 49 CubeSats from both commercial and government entities, including 25 from international organizations.