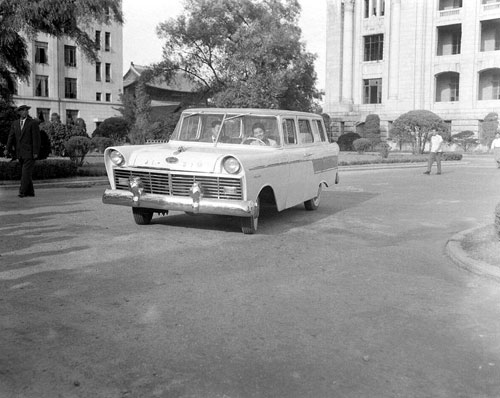 SEOUL, Jan. 20 (Korea Bizwire) – Commemorating Korea’s first automobile export to the U.S. on January 20, 1986, the National Archives of Korea introduced related material including photos and videos through its homepage (www.archives.go.kr) on January 20.

The archive agency picks a monthly theme according to major historical events. This month’s theme was titled “Korean Cars Advance into the World.”

The released materials consist of 34 videos, photos and documents that show the growth of the industry since the 1950’s. In 1957, soon after the Korean War (1950-1953), South Korea produced its first automobile, the “Sibal” sedan. At that time, it was introduced as a brand new Korean sedan with no major difference from those made in the U.S.

In the 1960’s, Korea formed the foundation for modern automobile manufacturing facilities, and it assembled its first small-sized cars in 1962. Viewers can find 18 photos of test drives (1957), the Saenara Motors’ plant dedication ceremony (1962), shipping of the Pony Excel (1986) and 4 documents including a composite plan for the automobile industry (1964).

According to the National Archives, South Korea has produced 4.52 million autos and exported 3.06 million units, earning a record high US$48.9 billion in 2014.

An official at the agency said, “After the ruin of the war, our strong will to produce Korean-made cars enabled us to become a strong power in the industry. Through these archived materials, we can see the industry’s growth at a glimpse.”