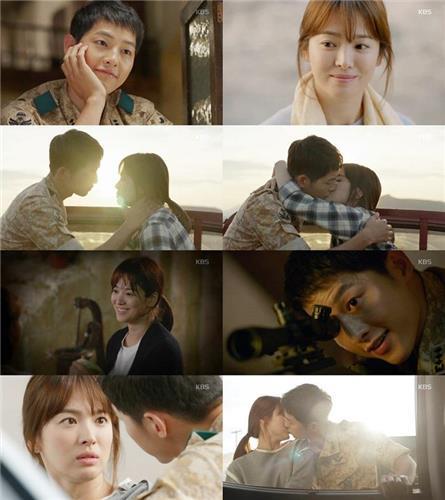 The season finale on Thursday attracted 38.8 percent of TV homes in South Korea, only 1.2 percentage points shy of the 40-percent milestone. (image: Yonhap)

SEOUL, April 18 (Korea Bizwire) – “Descendants of the Sun” has concluded what will go down in South Korean history as one of the brightest moments in TV with another renewed viewership record, data showed Monday.

The KBS 2TV series garnered a 36.8 percent viewership on average over last week’s Wednesday-Thursday night broadcasts, data by Nielsen Korea showed. The figure is less than the 40 percent it had hoped for, but is still unheard of in the increasingly competitive TV market.

The season finale on Thursday attracted 38.8 percent of TV homes in South Korea, only 1.2 percentage points shy of the 40-percent milestone.

The show starring actor Song Joong-ki and actress Song Hye-kyo was the only weeknight show to proceed as scheduled on the night of the general elections. MBC’s “Goodbye, Mr. Black” and SBS’s “Please Come Back, Mister” skipped an episode on Wednesday, when South Korea held its 20th general elections, and continued to ail with single-digit viewership on back-to-back broadcasts the following day.

The rest of the TV landscape remained much the same last week, with KBS 1TV’s “My Home’s Honey Jar” and KBS 2TV’s “Five Children” crushing the weekday and weekend drama games with 26.5 percent and 26.4 percent, respectively.

Cable shows were stagnant, with tvN’s “Memory” gathering just 2.9 percent of viewers on Friday and Saturday.’