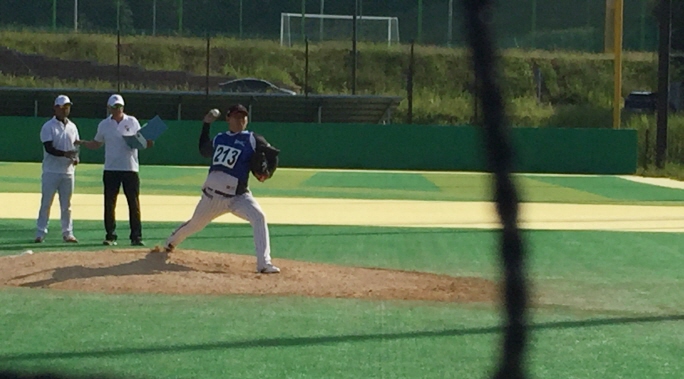 An open tryout is under way for the new, all-Korean club to join the Australian Baseball League at Team Up Campus in Gwangju, Gyeonggi Province, on Sept. 17, 2018. (image: Yonhap)

The yet-to-be-named club, which will be based in Geelong, 75 kilometers southwest of Melbourne, initially planned to hold one day of tryouts at Mokdong Stadium in Seoul.

But with more than 200 applicants, Winter Ball Korea, a sports management firm running the club, added two days to the schedule and moved the venue to Team Up Campus, which has three baseball diamonds in Gwangju, Gyeonggi Province, just south of Seoul.

Seventy-five position players took the field in the morning, and 95 pitchers showcased themselves in the afternoon session.

The new club will carry 25 players next season. While ABL clubs are permitted 22 players on the active roster, the Korean team will have three extra players as reserves. Once the roster is set, the Korean club will hold a 15-day training camp at home and depart for Australia on Oct. 31.

Some candidates showed up in their old uniforms from their Korea Baseball Organization (KBO) playing days, with clubs including the LG Twins, the SK Wyverns and the Samsung Lions.

The Geelong-based club will be one of two non-Australian clubs in the ABL in the 2018-2019 season, along with a new team from New Zealand. The now eight-team league will open the season in November, and the playoffs and the championship series will take place in February 2019.

Existing clubs are based in Adelaide, Brisbane, Canberra, Melbourne, Perth and Sydney.

Winter Ball Korea previously said those released by or retired from KBO clubs will have a chance to make the ABL team. South Koreans currently in the U.S. minor leagues will also be eligible, since the ABL season runs during the U.S. offseason.

Former KBO outfielder Kim Kyeong-eon, released by the Hanwha Eagles after last season, was the first play to commit to the new ABL club. The 35-year-old batted .271 with 55 homers and 393 RBIs in 1,183 KBO games.

Most players will view the ABL stint as a stepping stone back to the KBO or even foreign leagues. They will try to follow in the footsteps of right-hander Ko Chang-seong. The 33-year-old joined the ABL’s Sydney Blue Sox in 2017, a season after getting released by the KBO’s NC Dinos. After one season in the ABL, Ko is back in the KBO this year with the KT Wiz.

Then there is high school senior Kim Dong-hyeok, who has been patrolling the outfield for Jemulpo High School in Incheon, 40 kilometers west of Seoul. He didn’t get selected in the annual KBO draft last week, after batting .326/.470/.435 with a home run, 15 RBIs and five steals in 28 games this year.

“I am thinking about going to college, but I also think playing in Australia will present a good opportunity as well,” the teenager said. “I signed up for the tryout because I wanted to gain some experience.” 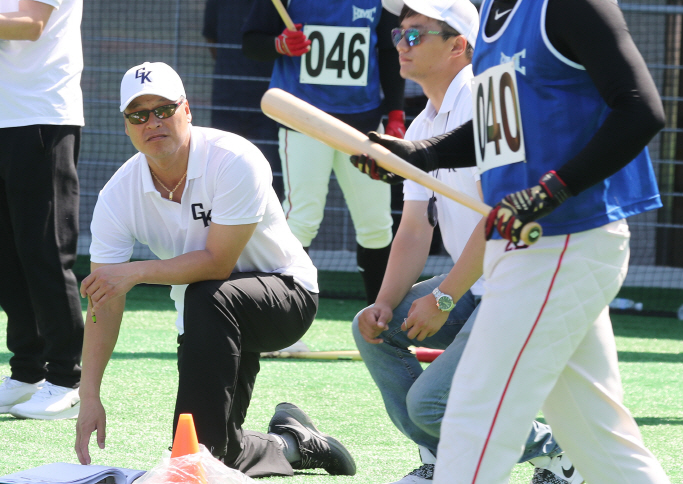 Koo Dae-sung (L), manager of the new, all-Korean club to join the Australian Baseball League, watches the open tryout for the team at Team Up Campus in Gwangju, Gyeonggi Province, on Sept. 17, 2018. (image: Yonhap)

Koo Dae-sung, former MVP-winning pitcher in the KBO, will be the inaugural manager for the new ABL team.

Koo, 49, pitched 13 seasons in the Korea Baseball Organization (KBO), all of them with the Binggrae/Hanwha Eagles franchise, with stints in Japan and Major League Baseball. The left-hander was the 1996 KBO MVP after going 18-3 with a 1.88 ERA and 24 saves.

After wrapping up his Korean career in 2010, Koo moved to Australia and pitched for the Blue Sox in the ABL well into his 40s. He has previously managed Australia’s under-15 national team.

Koo said he believes the level of play in the ABL may be higher than that in the second-tier Korean competition, the Futures League.

“It will take time for these players to get acclimated,” Koo said. “I hope they will have an opportunity to play the kind of baseball they want to play with confidence.”

The former pitcher said that while Australian pitchers can throw hard, their pitches may not have the same zip as what South Korean hitters are used to facing.

“I think Korean batters should be able to make good contact on those pitches,” Koo said. “As for pitchers, we’ll look for ones who have good control rather than high velocity.”

Koo said he and Park will both work with pitchers during the season.

Park said he was worried about putting the team together but his concerns gave way to a sense of anticipation after he watched the tryout.

“We’re thinking of holding a tryout every year, and our primary goal is to give amateur players an opportunity to play,” Park said. “It’ll be a tough season for players and coaches alike. We’ll pick players who are desperate for a chance and who are really dedicated to baseball.”