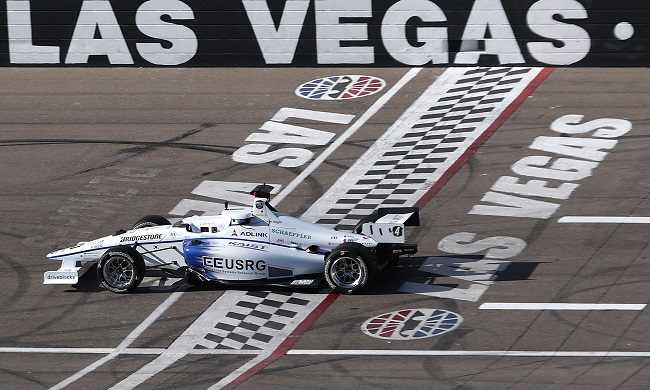 A self-driving race car with the algorithm designed by a Korea Advanced Institute of Science and Technology (KAIST) team speeds up on the track of the Las Vegas Motor Speedway in Las Vegas, Nevada, on Jan. 7, 2022. (Yonhap)

The Korean team KAIST, or the Korea Advanced Institute of Science and Technology, beat its first competitor, Autonomous Tiger Racing (ATR) of Auburn University, at the Autonomous Challenge @ CES, which took place at the Las Vegas Motor Speedway.

But the Korean team failed to advance to the final round when it lost to PoliMOVE, comprised of the Polytechnic University of Milan and University of Alabama, the final winner of the US$1 million race.

A total of five teams competed in Friday’s self-driving race, after four other teams were out of the qualification test the previous day.

The race was conducted as a single elimination tournament consisting of multiple rounds of matches.

The two cars took turns playing the role of defender and attacker, and each car attempted to outpace the other until one of both cars was unable to complete the mission.

The lab, Unmanned Systems Research Group, to which the Korean team belongs, has been working on the development of autonomous aerial and ground vehicles for the past decade, it said.

A self-driving car developed by the lab was certified by the South Korean government to run on public roads. 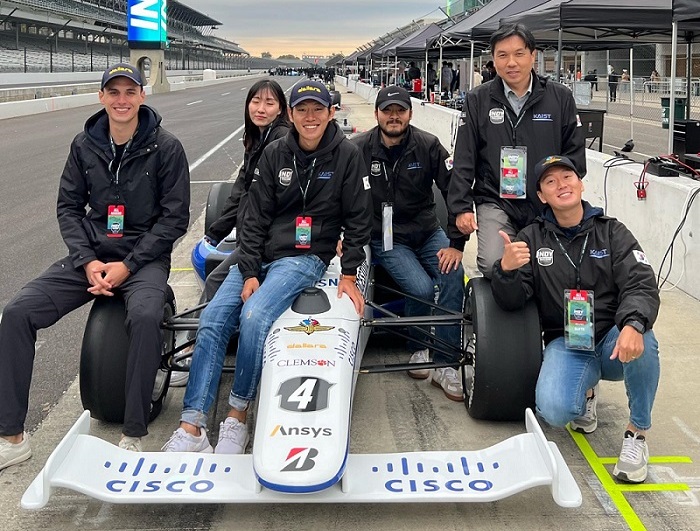 The photo provided by the Korea Advanced Institute of Science and Technology (KAIST) on Dec. 9, 2021, shows members of the Unmanned Systems Research Group when they participated in the Indy Autonomous Challenge (IAC), which took place on the Indianapolis Motor Speedway in Indiana on Oct. 23, 2021.

Each team designed the algorithm to control its race car, the Dallara-built AV-21, which can reach a speed of up to 280 kph, and make it safely drive around the track at high speed without crashing into the other.

The four-hour event was broadcast live online and did not go without a hitch.

At one point, the KAIST team, comprising professor Shim Hyun-chul and a handful of graduate students, briefly lost control of its car, which stopped in the middle of the track, before managing to move it again.

“They are definitely the smallest team but they are efficient and really are able to refine their algorithms and then pick up,” one of the two hosts of the livestreamed event said.

“They are just nipping at the heels of these top teams. They are really impressive,” the host said.

The event is the CES version of the Indy Autonomous Challenge, a prized competition that took place in October last year for the first time to engage university students from around the world to develop complicated software for autonomous driving and advance relevant technologies.