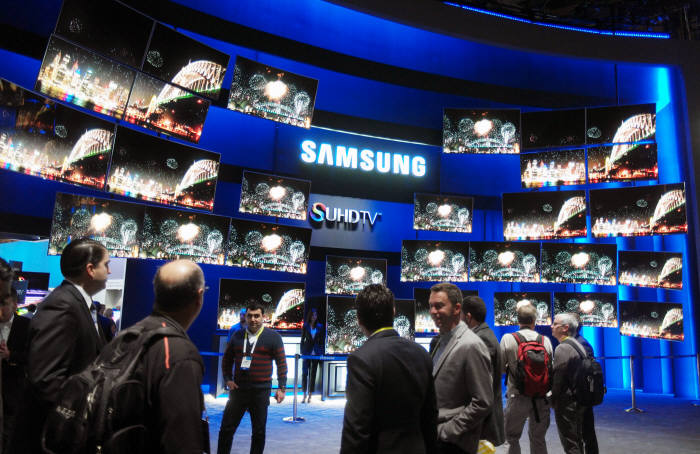 SEOUL, Jan. 13 (Korea Bizwire) — South Korean tech companies are expected to kick off mass production of their quantum dot TVs this year, analysts said Tuesday, amid intense competition with Chinese rivals to gain an upper hand in the global market with the advanced technology.

Samsung Electronics Co., the world’s top maker of smartphones and memory chips, is set to hold a local launching event for its latest TV lineups in late February, at which it will likely release its quantum dot model, dubbed SUHD TV, for sale.

A quantum dot TV is made with a film of semiconductor nanocrystals, known as quantum dot, that can reproduce 64 times more accurate colors than existing liquid crystal display (LCD).

It has surfaced as one of the next-generation display materials in the industry since its lower costs compared with OLED TVs allow more leeway for production volume.

Its home rival LG Electronics Inc. has been drumming up its own line of quantum dot TVs, planning to start mass production from the second quarter of this year.

The company said it has yet to decide which country will be the first for commercial sales.

Analysts here forecast the quantum dot to be the next fad for some time in the saturated market worth US$90 billion, at least until pricey OLED is reduced in cost, since consumers will likely prefer high-end lineups that tout a higher resolution or thinner screens.

“(Quantum dot) certainly has its value as an interim technology before OLED TVs become more available for mass consumers through an increase in production,” a Hanwha Securities Co. report said.

TV makers around the world are projected to ship some 1.3 million units of quantum dot TVs this year, with the figures to reach as high as 18 million units in 2018, according to an estimate by market tracker DisplaySearch.