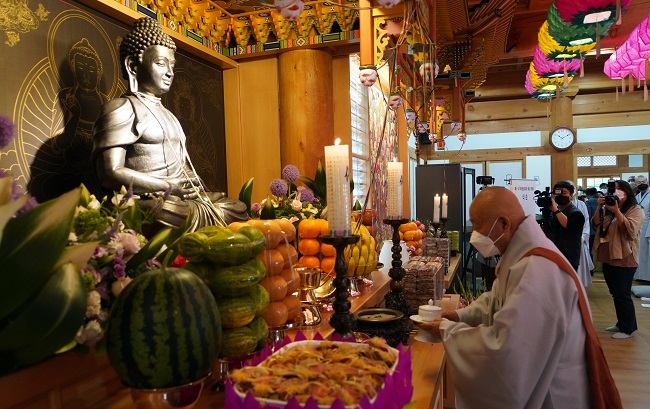 The Spiritual Patriarch of Yeongchuk Monastery takes part in an enshrinement ceremony of Buddha’s statue gifted by India at Tongdo Temple, about 420 kilometers southeast of Seoul, on May 16, 2021, in this photo provided by the temple authority.

YANGSAN, May 17 (Korea Bizwire) — A statue of Buddha donated by India has been enshrined at Tongdo Temple, a South Korean Buddhist temple listed as a UNESCO World Heritage site, the temple said Monday.

The enshrinement ceremony was held on Sunday at the temple in Yangsan, about 420 kilometers southeast of Seoul, attended by monks from the temple and Indian Ambassador to South Korea Sripriya Ranganathan.

It said the bronze statue, which weighs 225 kilograms, was placed at the Cheongpungdang hall for its international temple stay program.

“Through the ceremony, India and South Korea held a joyful event where two countries became one under the spirit of Buddhism,” the chief monk of the temple said in a statement.

The sculpture was donated to the Korean temple as part of a cultural exchange program between Seoul and New Delhi in October last year.

It was created in India and moved to South Korea in April. 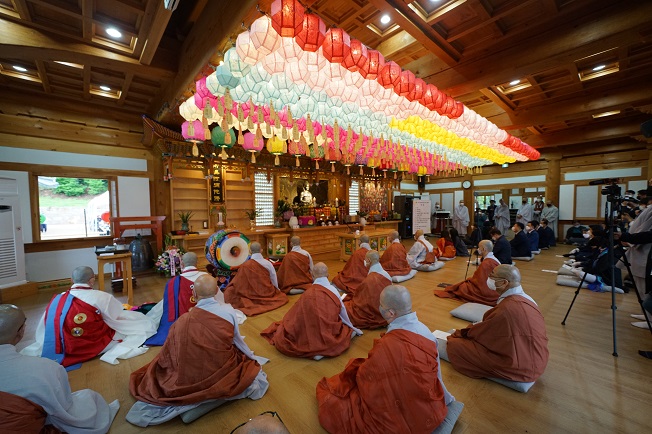 This photo, provided by Tongdo Temple in the southeastern city of Yangsan on May 16, 2021, shows its enshrinement ceremony of Buddha’s statue gifted by India.

During the ceremony, meanwhile, the temple delivered 30 million won (US$26,530) to the Indian ambassador to aid the South Asian country’s fight against the rampaging new coronavirus pandemic.

Tongdo Temple, initially established during the ancient Korean kingdom of Silla (57 BC-935 AD), was known as a temple without a Buddha statue until now. It, instead, enshrines Buddha’s “sarira,” or relics.

It was inscribed on the UNESCO World Heritage List in 2018, along with six other mountain temples here, for its “outstanding universal value.”