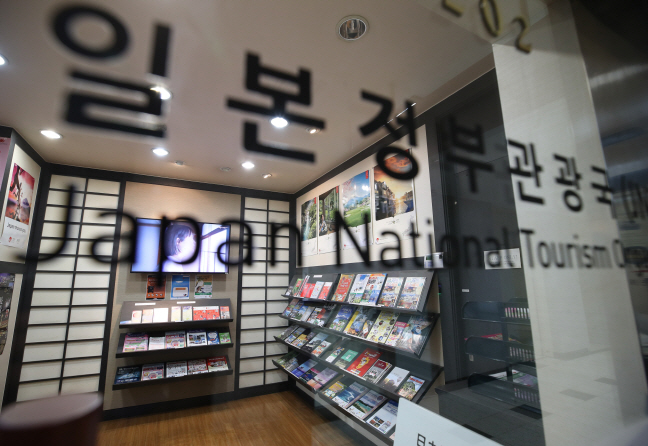 The office of the Japan National Tourism Organization in Seoul on July 4, 2019. (Yonhap)

In the first five months, the number of Koreans who traveled to Japan declined 4.7 percent year-over-year to 3.25 million from the same period last year, the Korea Tourism Organization said in a statement.

Helped by a shortened workweek and increased flights of low-cost carriers, the number of Korean tourists to the neighboring country continued to rise over the past seven years, jumping to 7.54 million in 2018 from 1.66 million in 2011, it said.

But this year, the number of Korean tourists to Japan is widely expected to turn lower amid growing tensions between Seoul and Tokyo over the latter’s latest export limits on high-tech materials to the former.

On Monday, Japan said it would tighten regulations on exports of three materials used in chips and smartphone displays to Korea amid a widening dispute over Koreans who were forced to work for Japanese companies during World War II.

South Korean chipmakers such as Samsung Electronics Co. and SK hynix Inc. will have difficulties finding alternative supply sources as Japan accounts for 70 to 90 percent of the production of the three materials.

South Korea’s presidential office said on Thursday it will actively seek diplomatic countermeasures, including complaining to the World Trade Organization against the “retaliatory” export limits on high-tech materials.

Outbound travel demand to Japan is on track to post negative growth for the first time in eight years as Korean consumers are moving to hold a nationwide campaign against Japanese products, industry sources said.