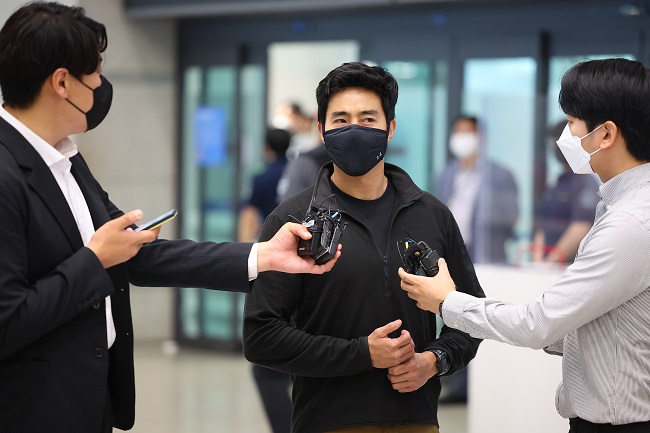 Rhee Keun (C), a South Korean volunteer fighter in Ukraine, speaks to reporters upon his arrival at Incheon airport, west of Seoul, on May 27, 2022. (Yonhap)

The Navy SEAL-turned-YouTuber arrived at Incheon International Airport, west of Seoul, at around 7:30 a.m., about three months after he left for Ukraine to join the Russia-Ukraine war as a volunteer fighter.

Appearing before reporters shortly after arrival, Rhee, in khaki pants and a black top, said he had cruciate ligament ruptures on both of his knees that require an operation.

Rhee walked on his own with a slight limp, and his company occasionally assisted him when walking about.

“I returned for rehabilitation and treatment,” Rhee told reporters, adding “I am anxious to go back” to Ukraine.

“There is a lot to do, as the war is not over yet. We should fight harder and continue to fight,” he said.

He briefly talked about his experiences from the war, including witnessing a Ukrainian civilian being shot and killed while he was on his first mission.

“I have seen many criminal acts while witnessing the war first hand,” he said.

Police plan to investigate him over passport law violation charges soon, as he traveled to the war-stricken country in defiance of the country’s travel ban to Ukraine.

Upon arrival, police checked the extent of his injuries and imposed an overseas travel ban on him.

“I will cooperate with a police investigation and receive punishment,” he said.

In a Twitter post a week earlier, Ukraine’s International Legion of Territorial Defense said Ken Rhee, who “sustained injuries on the battlefield … will return home for rehabilitation,” calling him by his English name.

South Korea has banned its nationals from traveling to all regions of Ukraine since mid-February amid safety concerns. Those who enter the country without approval can face up to a year in prison or a maximum fine of 10 million won (US$7,961) under the law.