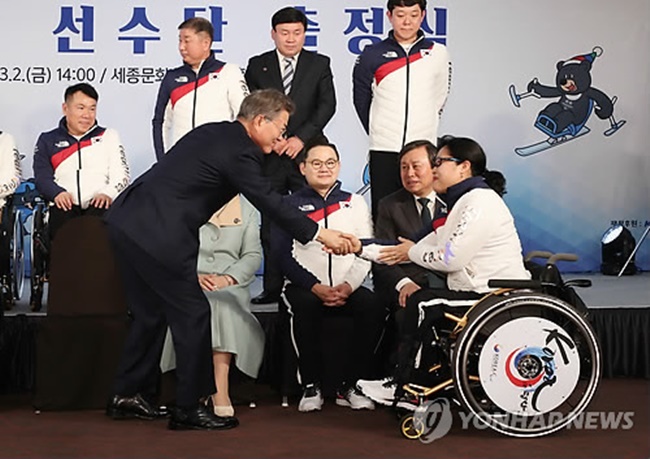 The women’s curling team earned silver at the Feb. 9-25 Olympics and became a global sensation with its inspiring performances and interesting personalities. The team is now better known as “Garlic Girls,” as the girls come from a town known for producing garlic, and “Team Kim,” which reflects curlers and coach all having the same last name.

“There were five Kims on the women’s curling team, but we all have different last names,” Seo, who serves as the skip for the team, said after the launch event for the South Korean squad for the PyeongChang Paralympics. ”Most of us became disabled while we were growing up. We hope to get good results so that we can encourage people like us that we can stand up and live well.”

“Our first goal is to reach the semifinals,” said head coach Baek Jong-chul. “If we get support from home fans from there, we’ll be able to go for gold or silver.”

Unlike previous Paralympics, where South Korea sent the top team in the national selection trials, the country this time picked best curlers at each position and formed an “All-Star team.”

The wheelchair curling competition at the PyeongChang Paralympicswill be held in a round-robin format featuring 12 teams. The round-robin matches will take place from March 10 to 15 at Gangneung Curling Centre in Gangneung, Gangwon Province, followed by the semifinals on March 16. Medal winners will be determined on March 17.