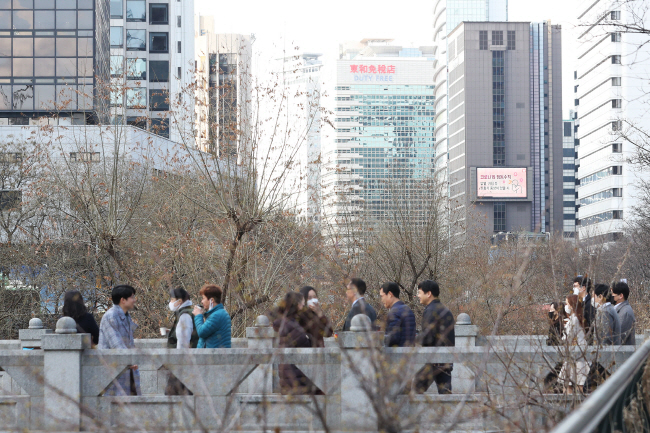 Paid vacation ensures only 70 percent of monthly wages, leading to a wage cut of up to 30 percent. (Yonhap)

SEOUL, March 10 (Korea Bizwire) — Entering the 50th day since the outbreak of the coronavirus, South Korean office workers are struggling under a growing financial burden.

Incruit, a South Korean job search portal, conducted a survey of 856 companies, 6.1 percent of which said they have sent employees home on an unpaid leave of absence.

Roughly 2 percent of respondents said they had cut employee wages, indicating that at least 8 percent of all companies had imposed a financial burden on their employees.

Only 5.8 percent of the companies sent employees home on a paid holiday, which falls short of the number of companies that imposed an unpaid leave of absence.

Paid vacation, in accordance with the labor standards act, ensures only 70 percent of monthly wages, leading to a wage cut of up to 30 percent.

Among unpaid leaves of absence, two weeks off was the most common option (25 percent), followed by one week (23.8 percent) and three weeks (8.8 percent).

Roughly one quarter of the respondents hadn’t decided when staff would return to work. Among them, small (34.1 percent) and medium-sized companies (35.7 percent) accounted for the majority. Only 7.1 percent were large conglomerates.

Unpaid leaves of absence and wage cuts were more prevalent in the tourism and accommodation sector, which has been directly hit by the coronavirus outbreak.

The survey also showed that 20.7 percent of companies in the tourism and accommodation industry sent employees on an unpaid leave of absence, while 6.9 percent resorted to wage cuts.

Roughly 3 in 10 companies said they had sent employees to work from home.