Those that benefit from Seoul’s inclusive welfare initiative are expected to be individuals employed as package delivery workers and day laborers, jobs often filled by the struggling and disadvantaged. (Image: Yonhap)

SEOUL, April 5 (Korea Bizwire) — In a first among all South Korean municipal governments, Seoul will extend the right to take paid sick leave to vulnerable members of society employed on a non-regular basis, individuals that occupy what is considered a social welfare blindspot.

Those that benefit from Seoul’s inclusive welfare initiative are expected to be struggling and disadvantaged individuals employed in jobs such as package delivery or who work as day laborers.

A city official said, “Unlike full-time workers, disadvantaged laborers cannot freely choose to take time off even when sick, because they do not have the option of taking sick paid leave. Even when they are sick with a severe illness, faced with both the financial burden of treatment and the loss of income, the odds are high that they will receive healthcare before it is too late.”

Going forward, individuals in this position who are hospitalized will receive their wages for work time missed courtesy of the city government. Officials are still working out the exact circumstances when this compensation system should apply, with coverage of fifteen days – the same amount of paid sick leave days allotted to full-time workers in a year – one of the ideas considered.

As an estimate, Seoul is projecting a yearly budget of 8.5 billion won to cover its paid sick leave measure. 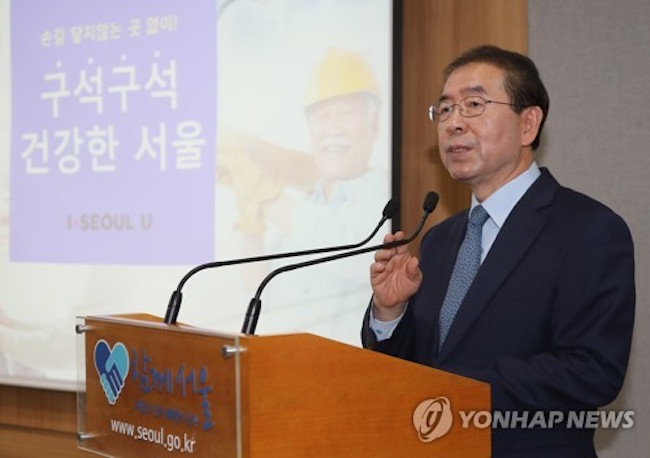 Seoul also announced initiatives to bolster the public healthcare system. District healthcare centers for the disabled will be increased in number from two to twelve by 2022, and city-funded hospitals will be expanded.

A “village doctor” program will be trialed at two city districts starting this year and will eventually be expanded to be offered by all twenty-five districts by 2022. The village doctor program will provide medical attention as well as healthy lifestyle guidelines such as how to eat nutritiously to community residents.

The various initiatives were presented by Seoul on April 4 as part of a comprehensive plan for boosting city residents’ health.