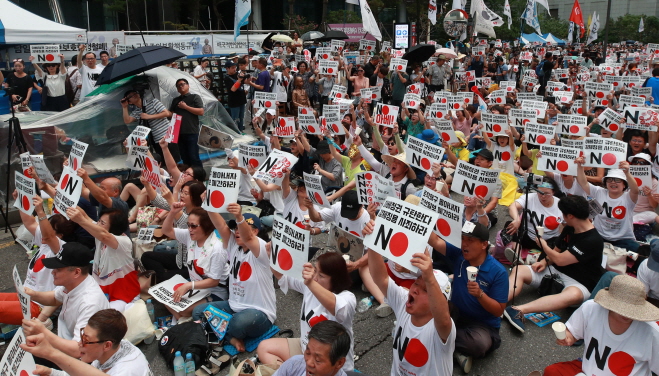 South Korean people hold a rally to denounce Japan’s expanded trade curbs against Seoul in front of the Japanese Embassy in Seoul on Aug. 3, 2019. (Yonhap)

“Apologize!” shouted the protesters in front of the Japanese Embassy in Seoul, waving banners reading “Censure the Abe regime” and “Apologize for wartime forced labor.”

Japan, which tightened exports of key materials to South Korea on July 4 in apparent retaliation over compensation for wartime forced labor, decided to remove Seoul from a list of trusted export destinations on Friday.

Japan’s moves have fueled anti-Japan public sentiment in Korea, with people boycotting Japanese products and staging a widespread campaign encouraging people not to travel to Japan.

At Saturday’s vigil, protesters blasted the Abe government for pursuing “militarism” through such unilateral measures and vowed to continue the anti-Japan campaign across the nation unless Tokyo puts a stop to its actions.

They criticized “Japan, an assailant 100 years ago, for apparently making an economic invasion against Korea.”

The organizers said they plan to hold rallies for at least for another two weeks until Aug. 15, Korea’s national holiday to mark the country’s liberation from Japanese colonial rule in 1945.

During the vigil, the organizers played video footage showing the testimonies of victims of Japan’s wartime forced labor.

They also expressed support for the Korean government’s pledge to take stern measures against Japan.