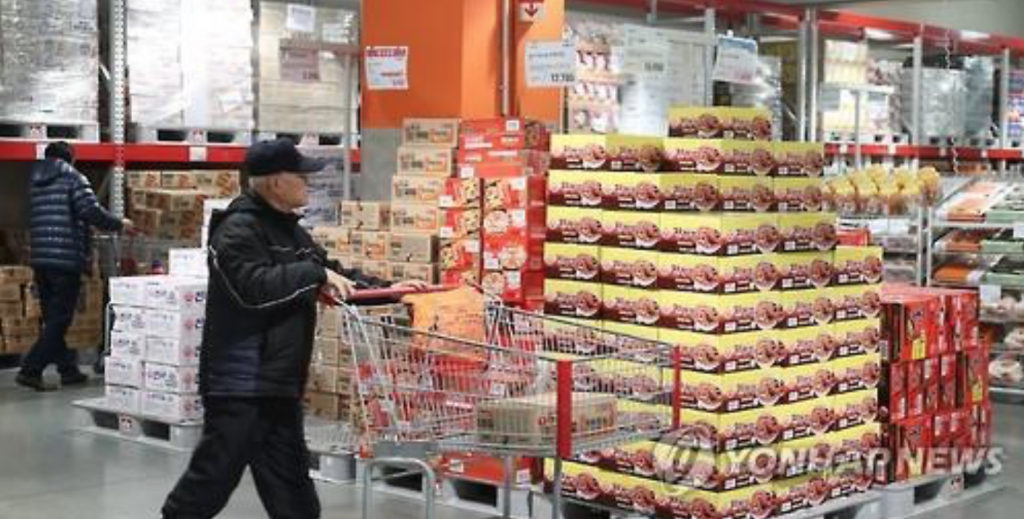 A customer passes by an instant noodle stand at a large discount store in Seoul on Dec. 19, 2016. (image: Yonhap)

No. 3 industry player Samyang Foods Co. said it is still considering whether and when to raise prices, adding specifics have yet to be determined.

Ottogi Co., the second-largest ramyeon maker, and other companies said they have no plans to hike product prices, but industry watchers they may follow in the footsteps of Nongshim.

“Following Nongshim’s price increase, Samyang and Ottogi are expected to mark up prices in light of past cases,” said Hong Jong-mo, an analyst at Yuhwa Securities Co. “They used to raise prices one to three months after Nongshim’s price hike.”

Instant noodle manufacturers are not alone. Major producers of drinks, bread and snacks have increased the prices of their products.

Archrival Hite Jinro Co. said Thursday it has decided to increase beer prices by an average of 6.3 percent. Lotte Chilsung Beverage Co. is widely expected to follow suit, though it has put off its decision.

In early December, leading confectionery Paris Baguette hiked prices of some products by an average of 6.6 percent, while bread prices are feared to rise further due to a severe dearth of eggs sparked by the bird flu outbreak.

Paris Baguette, the bakery franchise owned by SPC Group, said Friday that it has temporarily stopped production of 19 bread items, such as muffins and roll cakes, because of the short supply of eggs.

South Korea has destroyed more than 20 million chickens and ducks at nearly 400 farms across the nation since the first case of bird flu was reported in mid-November at a chicken farm on the southwest coast. The outbreak has sent egg prices soaring with chicken prices also tipped to soar down the road.

In addition, prices of Chinese cabbage, radish and other farm products are widely expected to remain high due to a tumble in production, hit by sizzling heat and drought in the summer.

According to Statistics Korea, prices of farm products jumped 9.6 percent in November from a year ago. In particular, people saw prices of fresh vegetables soar 36.8 percent last month, with those of Chinese cabbage, the main vegetable for the Korean traditional side dish kimchi, shooting up 82.1 percent on-year.