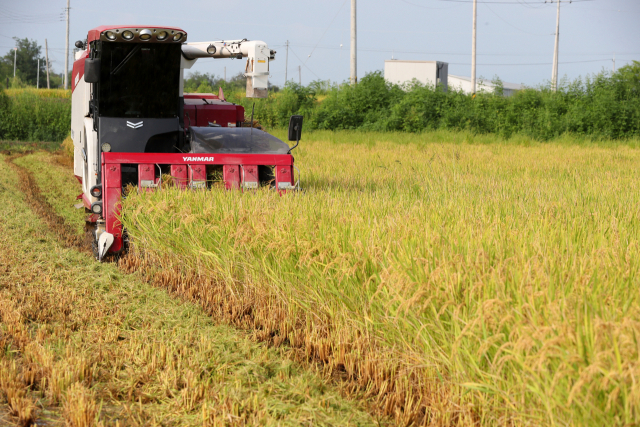 In this file photo, a farmer drives a combine to reap rice at a paddy field in the inter-Korean border town of Cheorwon, Gangwon Province, on Aug. 25, 2021. (Yonhap)

The country’s rice production reached 3.88 million tons in 2021, up 10.7 percent from a record low of 3.51 million tons the previous year, according to the data compiled by Statistics Korea.

It marked the first rebound since 2015 when rice output rose 2 percent on-year to 4.33 million tons. The figure declined for the fifth straight year in 2020.

The increase in the output came as favorable weather conditions from July through October, such as longer sunshine hours and less rainfall, helped the growth of rice grains, the statistics agency said.

The rise in cultivation areas for rice also boosted production. The combined size of rice paddies inched up 0.8 percent to 732,477 hectares — about half the size of the U.S. state of Connecticut, it added.

The yearly rice production, however, still hovered below 4 million tons for the fifth straight year.

Per capita average annual rice consumption hit a record low of 57.7 kilograms in 2020, compared with a record high of 136.4 kilograms in 1970, according to the agency.