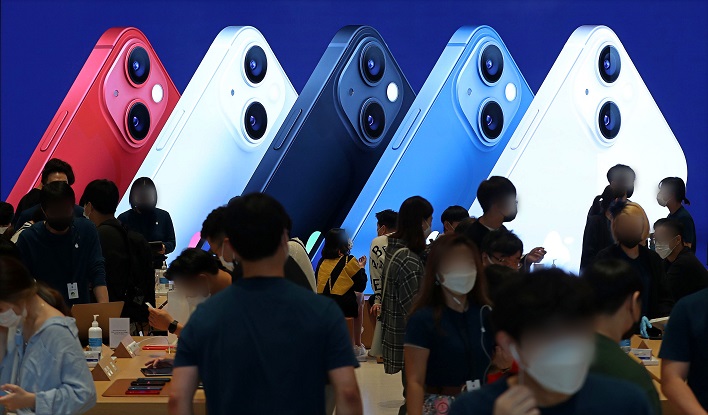 In this file photo, an Apple store in Seoul bustles with visitors, as Apple Inc.’s new iPhone 13 smartphone was released on Oct. 8, 2021. (Pool photo) (Yonhap)

The total number of 5G users reached 19.38 million in October, accounting for around 27 percent of the total 72.15 million mobile subscriptions in the country, according to the data from the Ministry of Science and ICT.

South Korea, which has a population of 52 million, first commercialized 5G networks in April 2019 and has so far secured 5G coverage across its 85 cities.

The latest data marks an increase from 18.41 million 5G subscriptions in September, with the launches of Samsung Electronics Co.’s new foldable phones — the Galaxy Z Fold3 and Galaxy Z Flip3 — in late August.

Samsung’s new foldable smartphones have been widely popular here, with their sales topping 1 million in just 39 days after its launch.

The new iPhones were also met with warm reception in South Korea, with the first series of preorders from top carrier SK Telecom selling out in just nine minutes in October.

SK Telecom Co., the country’s largest mobile carrier by subscriptions, had the most 5G users at 9.13 million, followed by KT Corp. at 5.92 million and LG Uplus Corp. at 4.29 million, the data showed.

The total number of 5G users is likely to reach 20 million by the end of this year, given that the average monthly net additions in 5G users stood at around 720,000.