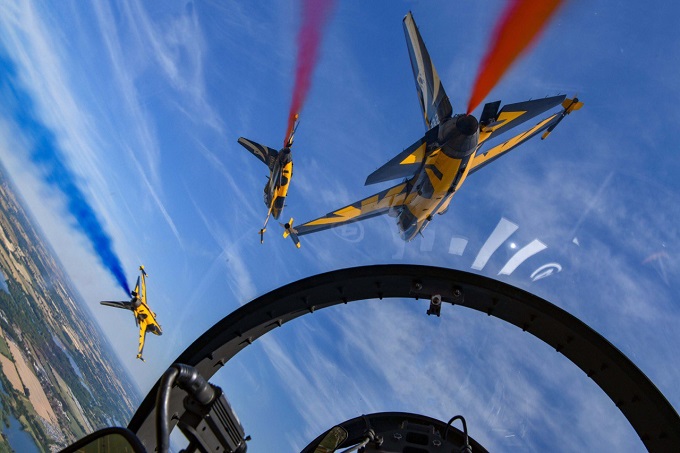 The South Korean Air Force’s aerobatic flight team conducts a performance at the Royal International Air Tattoo at Fairford, Gloucestershire, in Britain, in this photo released on July 18, 2022, by the armed service.

The Black Eagles team clinched the King Hussein Memorial Sword for the best overall flying demonstration and the As the Crow Flies Trophy at the three-day Royal International Air Tattoo (RIAT) at Fairford, Gloucestershire, which closed Sunday.

At the same air show a decade ago, the team won the same awards for its outstanding performance.

“No words could sufficiently describe how proud I am of you today,” Air Force Chief of Staff Gen. Jung Sang-hwa told the team at the show.

In this year’s edition, the Black Eagles staged a 25-minute performance each day, and the team pulled off complex air maneuvers, like the Taeguk sequence — in which their jets draw the shape of the Korean national flag — and the wedge roll, the Air Force said.

On Saturday, the team also conducted a flyby in skies above the Korean War memorial in Burton upon Trent in commemoration of the veterans who fought in support of South Korea during the 1950-53 conflict.

In its next schedule in Britain, the Black Eagles will conduct a flyby at the Fanborough International Air Show, which will run from Monday to Friday.