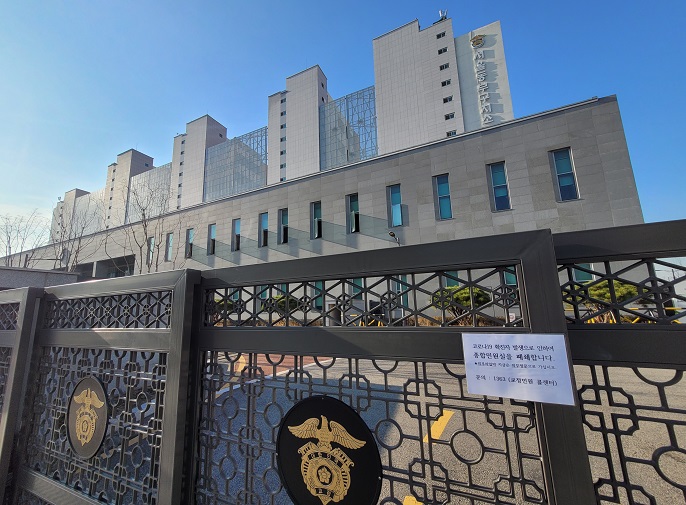 A notice for visitors of facility closure is placed on the entrance of Seoul Dongbu Detention Center in Seoul on Dec. 21, 2020. (Yonhap)

SEOUL, Dec. 21 (Korea Bizwire) — The National Court Administration on Monday advised courts nationwide to shut down for three weeks to slow down the rapid spread of the coronavirus.

“We advise judges to actively consider being flexible in delaying and rescheduling hearings and sentencing dates for three weeks starting Dec. 22,” Kim In-kyeom, head of the pandemic response team of the agency, wrote on the judiciary’s internal bulletin board.

The recommendation by the agency under the Supreme Court in charge of the general administration of the judiciary came as the country has been grappling with the third wave of the pandemic, with the number of daily new cases breaking record after record.

Urgent matters, including arrests and court injunction requests, can be exempt from the recommendation as long as strict health protocols are in place, according to the agency.

Court officials are advised to work from home at least twice a week and not to travel out of town during the three weeks of closure.

The move is the third in its kind, with the first going into effect in February and the second in August, both of which were enforced amid urgent need to tamp down the resurgent virus.

Meanwhile, virus outbreaks in correctional facilities have put more strains on state efforts to bring the pandemic under control. The Seoul Dongbu Detention Center has reported 217 infection cases among its officials and inmates as of Monday afternoon.

The Supreme Prosecutors Office also asked its offices around the country to refrain from doing face-to-face investigations and summons for the time being.