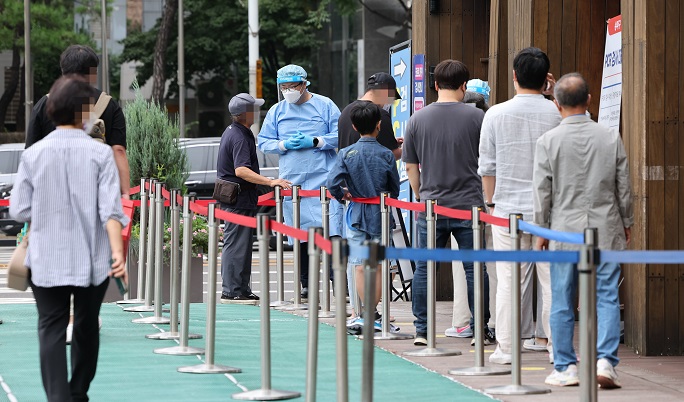 This photo taken Sept. 13, 2022, shows people waiting to take a COVID-19 test at a clinic in Songpa, eastern Seoul. (Yonhap)

SEOUL, Sept. 14 (Korea Bizwire) — South Korea’s new COVID-19 cases jumped to over 90,000 on Wednesday after the Chuseok fall harvest holiday that ended early this week amid worries over a spike in the virus infections.

Wednesday’s tally jumped by nearly 37,000 from 57,309 a day earlier following the four-day holiday that ended Monday. Daily infections have slowed after peaking at 180,746 on Aug. 17 in the latest virus resurgence.

The number of critically ill patients stood at 507, down 40 from the previous day.

As of 9 p.m., the country had reported 69,515 additional cases, down 21,724 from the same time the previous day. Daily cases are counted until midnight and announced the following morning.

Health authorities remain concerned over a possible “twindemic” — a simultaneous outbreak of COVID-19 and the seasonal influenza — as early as this fall amid an unusual spike in the number of flu patients since July this year.

The KDCA said 4.7 among 1,000 patients who visited the hospital from Aug. 23 to Sept. 3 showed influenza-like symptoms. The figure is the highest for the same seven-day period in the last five years.

The health agency said it is considering introducing a polymerase chain reaction test that can detect both COVID-19 and the flu at the same time.

Of the 52-million population, 87 percent are fully vaccinated and 65 percent have received the first booster shots. Around 14 percent of them have gotten their second booster shots.