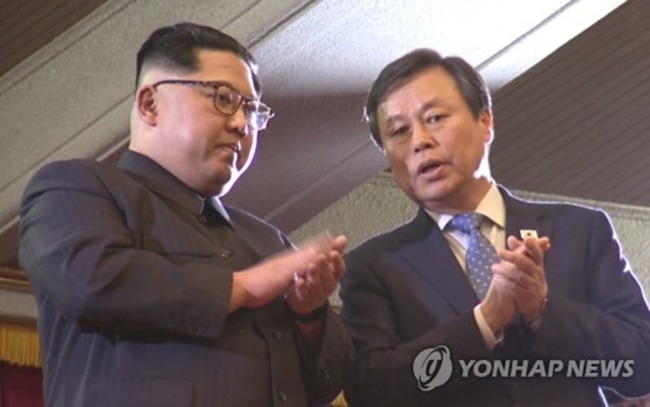 South Korean Minister of Culture, Sports and Tourism Do Jong-whan (R) talks with North Korean leader Kim Jong-un during a performance in Pyongyang by a South Korean art troupe on April 1, 2018. (Image: Yonhap)

“Chairman Kim said there should be another concert in the South since ‘Spring Comes’ was successful,” Do Jong-whan said during a meeting with South Korean reporters.

“Then I proposed the idea of entitling it ‘Autumn Came’ almost simultaneously with him,” said the poet-turned politician.

A 160-member South Korean artistic group performed in Pyongyang for the first time in more than a decade on Sunday in return for a North Korean art troupe’s visit to Seoul in February to celebrate the PyeongChang Winter Olympics. Do watched the performance sitting next to Kim Jong-un and his wife Ri Sol-ju.

Do said the North Korean leader showed considerable interest in South Korean pop songs and their singers during the show.

“He was delighted when singer Yoon Do-hyun began performing the song, ‘Man is Ship and Woman is Harbor,’ and asked musical director Yoon Sang about the song’s arrangement,” Do said.

Kim also asked if a song performed by Baek Ji-young is a latest hit and how much popular she is in the South, he added.

The South Korean art troupe is to hold a joint performance with North Korean artists on Tuesday afternoon before returning home, wrapping up a four-day visit.