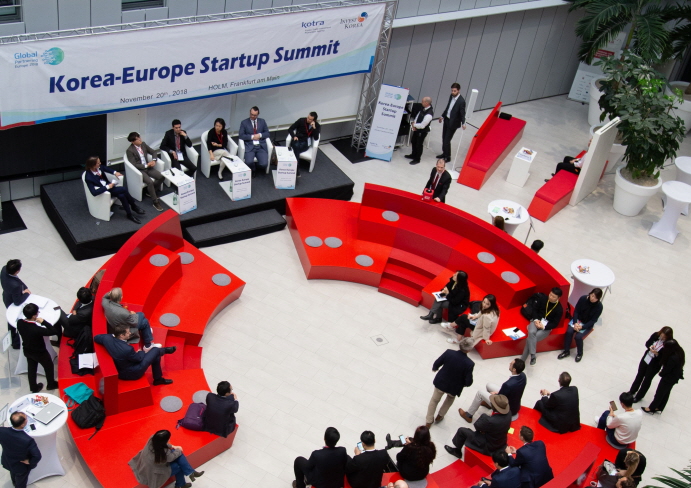 The meeting invited some 10 young South Koreans to talk about the difficulties in getting a job overseas, engaging with Korean businesspeople in Germany to exchange know-how. (image: Korea Trade-Investment Promotion Agency)

SEOUL, Dec. 3 (Korea Bizwire) — The South Korean Consulate-General in Germany and the K-Move center held a joint conference in Frankfurt, Germany on November 30 to talk with young South Koreans about looking for jobs overseas.

The meeting invited some 10 young South Koreans to talk about the difficulties in getting a job overseas, engaging with Korean businesspeople in Germany to exchange know-how.

Among European countries, Germany is one of the most desired destinations for South Korean job seekers, as it is Europe’s largest economy and has an abundance of quality positions to fill.

The Institute for Employment Research said there were more than 1.2 million jobs available in Germany as of the third quarter of this year.

To better accommodate empty job positions, Germany has been increasingly relying on foreign workers. Last year, more than 3.47 million foreigners were employed in Germany, which was a 10.7 percent increase from the previous year.

According to the Consulate-General, more than 4,880 South Koreans were employed in Germany as of June this year.

South Korea and Germany concluded a working holiday agreement in 2009, leading to a major increase in the number of young South Koreans visiting Germany.

South Korean workers are concentrated in the trade, commerce and service industries in Germany, although there has been a recent hike in interest in the IT and science sectors.

Among EU states, Germany is where South Koreans acquired the largest number of blue cards, EU working visas provided to professionals with graduate certificates being paid more than 49,600 euros per year.

Job opportunities in Germany are expected to increase as the German government plans to lift immigration restrictions on professional job seekers.

There are still pending difficulties, however. The German language is one of the largest obstacles to employment in Germany, as pointed out by most participants in the meeting.

Job seekers who weren’t able to get a job due to language barriers have gone to small Korean businesses in Germany for work. This is also the case for South Korean exchange students.

As more South Koreans are coming to Korean businesses for work, they are increasingly being exposed to various vulnerabilities, such as being paid below the minimum wage.

A Korean student organization in Leipzig/Halle conducted a survey on 79 employees at Korean businesses, in which only 35 percent said they received more than the minimum wage. Only 37 percent had signed a formal contract.

Some point out, however, that German language is not a critical factor to employment in Germany. “I’ve lived in Germany for 13 years, and I am not fluent in German,” said one businessman at the meeting.

“What matters is appealing to your strengths.”

Eom Ik-hyun, a vice director at the Korea Trade-Investment Promotion Agency’s Frankfurt Trade Center, said, “English tends to be more useful than German when it comes to local logistics firms.”

Keum Chang-rok, consul-general of South Korea in Germany, said, “Germany is suffering from difficulties that arise from reaching the lowest unemployment rate since reunification,” adding that “a step-by-step resolution of issues surrounding employment is necessary as more South Korean youth are taking interest in working in Germany.”