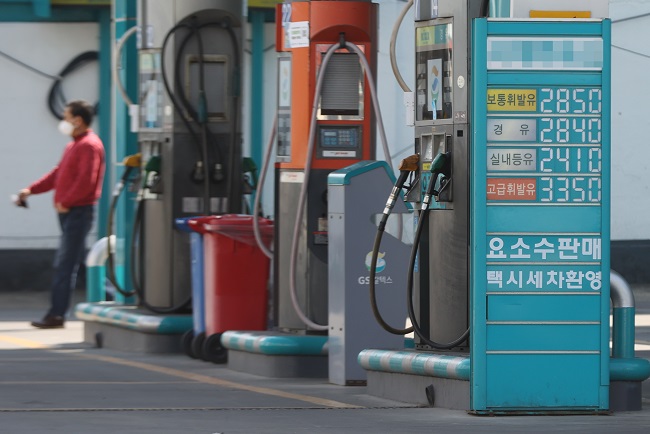 This undated file photo shows gas prices at a station in Seoul. (Yonhap)

The country’s imports of oil, natural gas and coal came to US$38.49 billion from Jan. 1-March 20, up 85.4 percent from a year earlier, according to the data from the Korea Customs Service.

Crude oil imports soared nearly 70 percent over the cited period, with those of natural gas and coal shooting up 92 percent and about 151 percent, respectively.

The jump in energy imports came due to high international prices that resulted from the global economy’s recovery from the coronavirus fallout and Russia’s attack on Ukraine.

For example, import prices of Dubai crude oil, South Korea’s benchmark, closed at $115.60 per barrel Thursday, up from the upper $70 range at the end of last year and the lower $50 band in January last year.

Market watchers said soaring energy prices are emerging as a burden on the country’s trade balance and consumer prices.

South Korea posted a trade deficit of $5.98 billion over the cited period, a sharp turnaround from a surplus of $6.61 billion a year earlier.

Consumer prices in Asia’s fourth-largest economy swelled 3.7 percent in February from a year earlier, growing more than 3 percent for the fifth consecutive month.

Analysts predicted the country’s consumer prices to rise further in the coming months, in light of the uptrend in international crude prices.