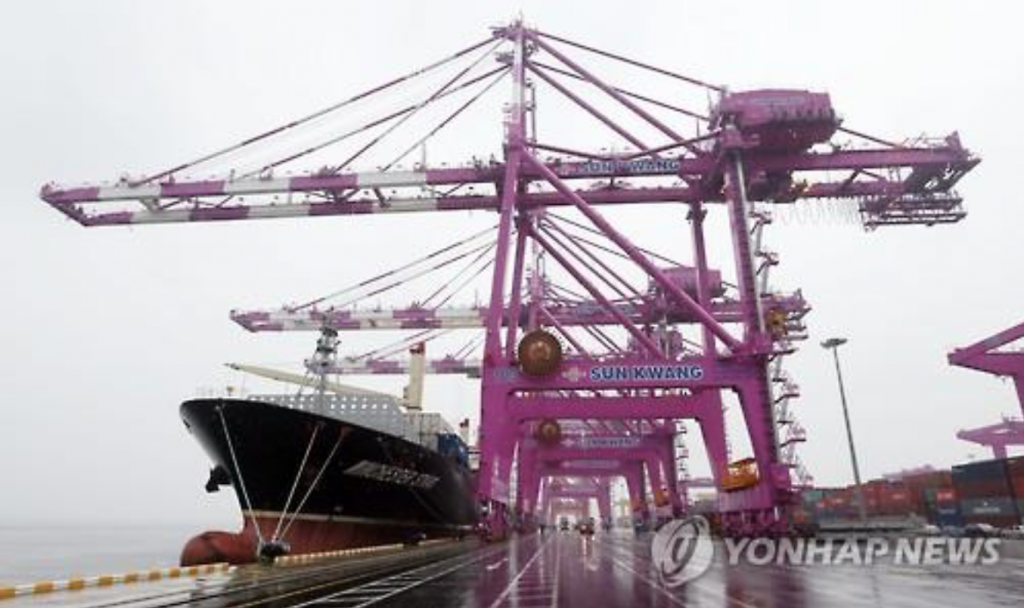 Shipments of South Korean-made vessels nearly halved to $1.99 billion this year from $3.46 billion, dragging down the entire exports tally by 9.2 percentage points in July, it added. (image: Yonhap)

SEJONG, Aug. 1 (Korea Bizwire) – South Korea’s exports fell by more than 10 percent in July, with the rate of decline returning to double digits after single digits in May and June, the trade ministry said Monday.

Outbound shipments came to US$41 billion last month, down 10.2 percent from the same month last year, according to the Ministry of Trade, Industry and Energy.

The double-digit fall came after on-year declines of 5.9 percent and 2.7 percent in May and June, respectively.

Imports continued to shrink at a faster clip, falling 14.4 percent on-year to $33.3 billion in July.

The trade surplus came to $7.8 billion, marking the 54th consecutive month of a surplus.

The ministry said one-off factors like fewer working days and a fall in vessel shipments contributed to the deceleration in July.

“We have fewer working days this year than the previous year. And sales of ships backtracked last month,” the trade ministry said in a release.

Shipments of South Korean-made vessels nearly halved to $1.99 billion this year from $3.46 billion, dragging down the entire exports tally by 9.2 percentage points in July, it added.

The shipbuilding industry, which has been suffering from massive operating losses from overseas plant projects, saw its overseas shipments soar 29.6 percent on-year in June, a turnaround from a 16.7 percent drop in May, lending support to the modest total export decline of 2.7 percent in June.

The ministry noted that a partial strike by unionist workers of Hyundai Motor Co. and scheduled repair and maintenance at petrochemical companies also played a role in the latest decline.

Exports of automobiles slumped 14.6 percent on-year in July, while those of petrochemical products sank 12.3 percent.

However, shipments of personal computers rose for three months in a row in July to hit a 6 1/2-year high of a 39.1 percent jump on the back of rising global demand for new devices.

By region, exports to China, South Korea’s largest export destination, sank 9.3 percent last month from a year ago, continuing their losing streak since the beginning of the year.

Shipments to the United States and the European Union fell by 14.3 percent and 4.3 percent, respectively.