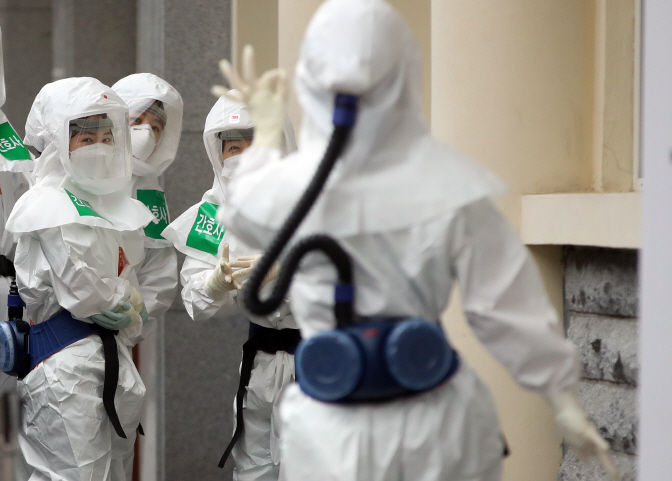 A medical worker gestures toward her colleagues as she enters a special ward for coronavirus patients at Keimyung University Daegu Dongsan Hospital in the southeastern city of Daegu on April 17, 2020. (Yonhap)

SEOUL, June 30 (Korea Bizwire) – The South Korean government’s response to the novel coronavirus is favorably appreciated by people around the world, a survey showed Tuesday.

Commissioned by the Joongmin Foundation for Social Theory, a Seoul-based liberal institute, the survey was conducted by Rakuten Insight Surveys on 15,312 people living in 30 cities across the world from April to May.

Among the cities are New York, Los Angeles, London, Paris and South Korea’s Seoul and Daegu, once the epicenter of the country’s coronavirus outbreak.

Asked to evaluate the role of each country in dealing with the COVID-19 pandemic on a 10-point scale, people in 10 cities gave the highest and second-highest points to the South Korean government for its virus control policies.

Assessing the consequences of their governments’ quarantine policies on a scale from one to five, Taipei citizens gave 4.5 points to their government and residents in Seoul granted 4.3 points.

For the credibility of government-offered information, New Delhi people gave 3.4 points followed by those in Taipei, Wellington, Singapore and Oslo with 3.1. Seoul citizens handed 3 points for the data reliability.

South Korea experienced a rapid surge in coronavirus infections in February and March, once rising to the second place in terms of total cases in the world after China.

But South Korea has since notably flattened the curve through massive testing, precise contact tracing and intensive treatment. Its total cases reached 12,800 on Tuesday, with daily new cases hovering around 40 in recent days.

“It was firmly proved through the survey of residents of 30 big cities around the world that South Korea has emerged as a success model through the experience of dealing with COVID-19,” said Han Sang-jin, honorary professor of the Seoul National University who leads the foundation.