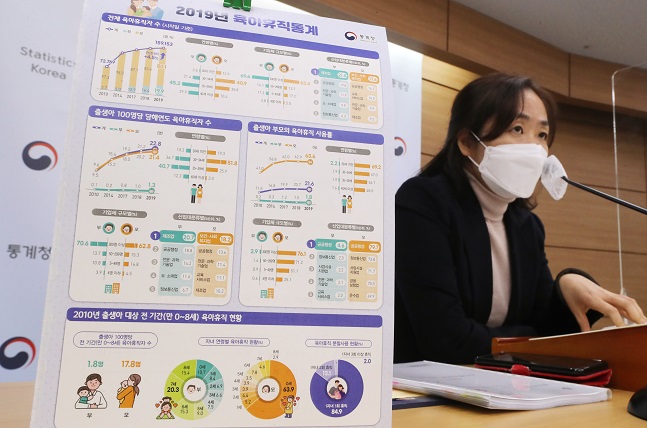 This file photo, taken on Dec. 22, 2020, shows a government official explaining 2019 statistics for parental leave at the government complex in Sejong. The tally showed that mothers accounted for 80.1 percent of those on parental leave in contrast to 19.9 percent who were fathers. (Yonhap)

The country’s gender equality index stood at 73.6 out of 100 in 2019, inching up 0.5 points from the previous year, according to the report by the Ministry of Gender Equality and Family.

The biggest on-year increase came in the decision-making category, rising from 36.2 in 2018 to 38.1 in 2019. The ministry attributed the on-year increase to a growing number of women in senior government posts and committees.

By region, Gwangju, Daejeon, Busan and Jeju were some areas where gender equality was tallied at highest. In contrast, gender equality level remained low in South and North Gyeongsang, South Jeolla and South Chungcheong provinces.

“While the level of gender equality is consistently improving, there is still a gap depending on categories,” said minister Chung Young-ai, pledging to push for effective measures that can improve gender equality.