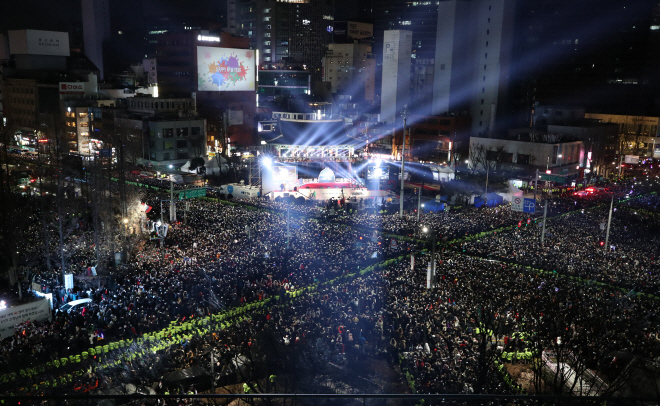 Citizens gathered in front of Bosingak Belfry in central Seoul on Dec. 31, 2018, to take part in the bell-ringing ceremony. (Yonhap)

The most attention-grabbing bell-ringing ceremony took place at Bosingak Belfry in Jongno, central Seoul, as several prominent celebrities rang the bell 33 times amid cheers from tens of thousands of citizens gathered to celebrate the beginning of the new year.

This year, the celebrities invited to take part in the Bosingak bell-ringing ceremony included baseball pitcher Ryu Hyun-jin, who returned home Monday after signing a four-year deal, worth US$80 million, with the Toronto Blue Jays.

Ryu led Major League Baseball with a 2.32 ERA in 2019 while pitching for the Los Angeles Dodgers and finished second in the National League Cy Young Award voting.

Ryu had the honor along with 11 other civic representatives, including Pengsoo, a mega-hit penguin character; Korean War veteran Kang Young-gu; forensic psychologist Lee Soo-jung; Michael Reiterer, ambassador of the European Union to South Korea; Lee Ha-eun, a member of multicultural families; and Lee Seo-yoon, who served as an interpreter for dignitaries during the 2018 PyeongChang Winter Olympics.

Before and after the bell-ringing ceremony, a special K-pop performance was held on a stage in front of the belfry, featuring Hinapia, No Brain, Paradise and other musical acts.

The bell-ringing ceremony, broadcast live across the country, has been held every year since 1953. The ringing of the bell bids farewell to the old year and is an expression of hope, happiness and expectations for the new one.

The event has its roots in the practice of the Bosingak bell being rung 33 times at 4 a.m. to signal the end of the night curfew and start of the new day during the Joseon Dynasty (1392-1910).

The bell sounded the opening of Seoul’s four main and four small gates to traffic after they were closed for the night. The ritual is called “paru” in Korean.

The operation of public transportation, including subways, in the city will be extended by one hour till 2 a.m. to help people get home after taking part in the event.

Traffic will be controlled on roads around the Bosingak Belfry from 11 p.m. to 1:30 a.m., with all buses passing through the area required to make detours during that time.

More than 80,000 people were expected to see the ceremony at the scene.