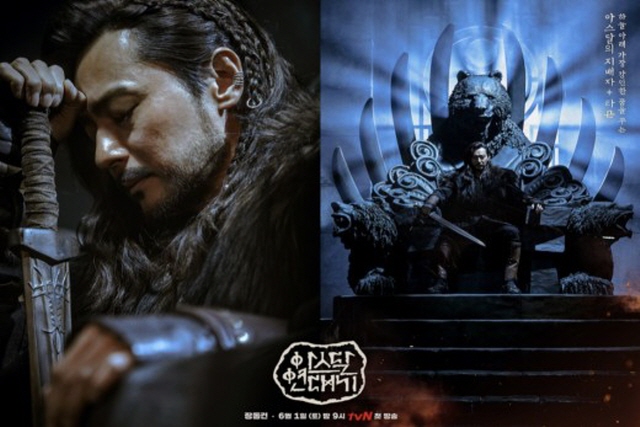 SEOUL, Jun. 11 (Korea Bizwire) — The blockbuster fantasy series “Arthdal Chronicles” has been struggling not only with its lower-than-expected viewership ratings but with a ballooning controversy over its apparent resemblance to famous TV dramas and movies.

First aired on June 1 by cable channel tvN, the weekend drama is about a story when politics is just being birthed in the ancient city of Arthdal.

It was in the center of media attention even before the premiere thanks to its star-studded cast, including movie stars Jang Dong-gun and Song Joong-ki, and its huge production budget, reportedly 40 billion won (US$33.7 million).

But the drama received disappointing results after the first two weeks, with its viewership hovering around 6-7 percent for four episodes, far lower than the near double-digit numbers of tvN’s previous hit series like “Mr. Sunshine.”

At the same time, critics said that characters, costumes, settings and even the rendering of “Arthdal Chronicles” are a hodgepodge of foreign fantasy dramas and movies that cover the ancient times or have fictional backgrounds.

In the drama’s teaser images, many of the characters were spotted wearing costumes reminiscent of those in the U.S. hit fantasy series, “Game of Thrones,” in terms of color and design.

A picture that compares the clothes and props of the characters between the two dramas, known to be uploaded on the U.S. social website Reddit, spread widely in Korean online communities, portals and social media.

Even the background settings of The Great Black Wall seemed like the Wall in the northern border set in the U.S. drama.

Others also pointed out some scenes and plots were likely from the 2006 movie “Apocalypto” and 2009 science fiction film “Avatar.”

But the drama crew argued nothing is comparable to the epic “Game of Thrones,” and they tried to create a new story based on their imagination.

“‘Game of Thrones’ is a drama that covers the entire human history since the time when people dance around a bonfire. It is the apex of human entertainment, and our series can hardly match up to that,” Park Sang-yeon, one of the co-screenwriters of the drama, said in a press conference held in Seoul last month when questioned about the robust similarity between the two dramas.

Director Kim Won-seok, who made several well-rounded dramas, including “Sungkyunkwan Scandal,” “Misaeng,” “Signal” and “My Mister,” said he knows it is difficult to measure up to the expectations for South Korea’s biggest project.

“I tried hard, and I know that this can’t be an excuse,” he said. “I want to ask TV audiences to lower their expectations slightly and enjoy it.”