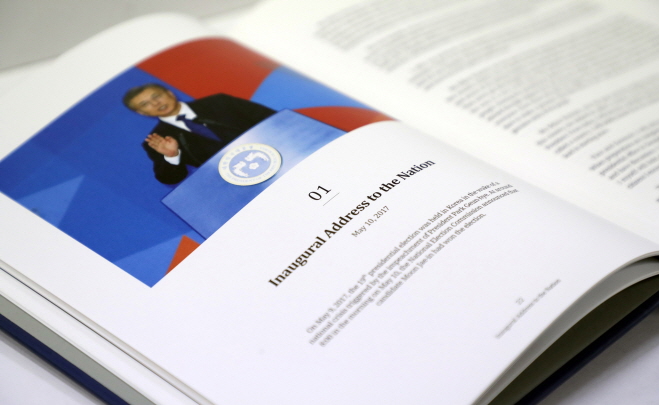 SEOUL, Jul. 2 (Korea Bizwire) — A compilation of President Moon Jae-in’s major speeches over the past year, translated in English, was made public Tuesday.

The 288-page anthology, titled “Selected Speeches, President Moon Jae-in of the Republic of Korea,” offers transcripts of 56 speeches chosen from among 305 addresses and remarks made by the president between May 10, 2018, and May 9, 2019.

The compilation includes Moon’s address at the State Duma of Russia on June 21, speech at the May Day Stadium in Pyongyang on Sept. 19 and remarks at the East Asia Summit on Nov. 15.

It also contains his op-ed, titled “The Greatness of the Ordinary,” published by the Frankfurter Allgemeine Zeitung (FAZ), along with various photos highlighting his activities during the year.

Cheong Wa Dae posted the volume on its English website and the government’s English portal, www.korea.net. E-books will be available as well starting at the end of August, Cheong Wa Dae said.

A Korean-language collection of his speeches has been published as well.

“This volume offers a record of how hard the Moon Jae-in Administration has worked to the best of its ability to restore the people’s shattered pride and create a country where all can prosper together,” Noh Young-min, presidential chief of staff, wrote in the preface.

“Moreover, it presents a chapter in the country’s history when we took up the challenge of fundamentally transforming economic and social structures.”

He was referring to the political situation when Moon was elected in a snap election in May 2017 after President Park Geun-hye was impeached in what Moon calls the “candlelight revolution” by ordinary people.